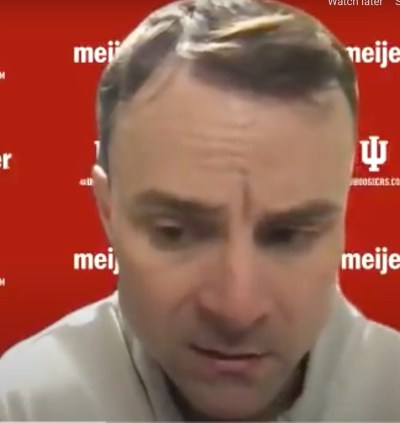 Not the face of a confident or happy coach following last night’s loss to Michigan State.

Barring a Hail Mary run through the Big 10 Tournament next week, the Indiana Hoosiers will fail to be invited to the NCAA Tournament for a fifth consecutive year.  That hasn’t happened since 1972.

At 7-11 with one game remaining, the Hoosiers are guaranteed to finish with a non-winning Big 10 record for the fifth straight year.  That hasn’t happened in 102 years.

These are weird times, and it can be argued that COVID has caused chaos and unpredictability in college basketball for which a coach cannot be held accountable.  That would be the argument advanced mostly by the coaches who have failed to compete successfully, and their apologists.

Because Indiana’s run of mediocrity began long before anyone had ever heard of COVID-19, the  virus defense is convenient and spurious.  The Hoosiers are just not very good.  As is the case with most losing teams, they are disconnected, dispassionate, and seemingly incapable of playing well for more than 10 minutes at a time.

In previous years, it was difficult to lay the entire responsibility for Indiana’s woes at the feet of Archie Miller because he was dealing with players recruited by Tom Crean.  Those days are over.  While Aljami Durham and Race Thompson were Crean recruits, this is year four for Miller. He’s had ample opportunity to lead these guys to embrace his expectations, or see they ply their wares on another campus.

This is Miller’s fourth team, and none have been good.  Last year’s group likely would have played in the NCAA Tournament if not for the COVID driven cancellation, but they were 9-11 in conference play, so whether they were an 11-seed or just outside the bubble is an unimportant detail in evaluating Miller’s work in Bloomington.

Only a game against Purdue remains in this endless regular season, and the Boilermakers are a team Miller has never beaten.  Needless to say, fans are looking forward to the end of the interminable season more than they are Saturday’s game at Mackey Arena.

When that game and the Big 10 Tournament ends, all eyes will turn to athletic director Scott Dolson as he weighs the pros and cons of allowing Miller a fifth year to right the ship and achieve the lofty goals set for the program by former AD Fred Glass as he introduced Miller four long years ago.

Glass promised a program that would compete annually for Big 10 titles and National Championships.  Obviously, those goals have not been approached, and there are no tangible reasons to believe next year – or any year – might be any different.

There are a series of relevant questions that Dolson needs to answer before making the call to either replace Miller or allow him to return for a fifth swing at getting it right:

That’s a hell of a list of questions for Dolson to answer before plotting a course forward.  No matter what he decides, there has to be movement somewhere, somehow toward a reason to invest hope in Indiana’s basketball program.  Rolling back IU Basketball as it exists today will be met with indifference.  Apathetic fans do not renew season tickets or write checks to endow scholarships, expand facilities, and fund the endowment.

More of the same will not get it done in Bloomington.  Change must come, but in what form?  Dolson certainly understands the need for change, right?