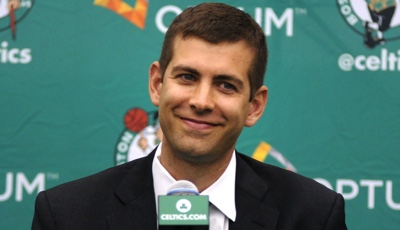 Why is this man smiling? Whatever he chooses – stay in Boston or come to IU – he will enjoy earning millions for occupying the desk of his dreams.

Dameshek works for NFL.com has 198.6K followers, so people are taking him seriously.  Pirre is from UStadium seems legit in that she did not tweet the news without a qualifier.

WEEI sportstalk hosts in Boston were just stunned when they saw “Brad Stevens to Indiana” went from 25-1 to off the board at Las Vegas sports books.  Yes, I’m going old school by listening to WEEI like some boob to hear the news break rather than watch Twitter for the Woj Bomb.

Actually, I’m watching Twitter as I listen to WEEI because I trust Woj and have never heard of a Dameshek Bomb.

I’m still not sold that Brad is coming because I always wait for confirmation from one of the participants in the negotiations.  I need to hear it from Indiana athletic director Scott Dolson or Brad Stevens.  A press release from IU sports information director J.D. Campbell would suffice.  Talk about old school.

Brad to IU is a 1-in-3 longshot for me – still.  That’s what it was when I woke up this morning – and that’s where I still have it.

There are more people who claim Brad flew into Bloomington to meet with Dolson last night.  We assume that didn’t happen because those meetings are almost always held at an airport in a city where no one is looking for either the participants.

I was called a “lying snake” by a Florida attorney yesterday because I ignored Brad’s non-denial denial a few days ago on Boston radio.  Like Brad might actually tell the hosts, “You know, negotiations with Indiana could go either way, so I may or may not leave to coach the Hoosiers.  You might be stuck with me if Tracy (Brad’s wife and agent) can’t work her magic”  Some people have been in the room before, and some people haven’t.  I didn’t yell at the lawyer.  I’m here to educate, not chastise or belittle.

At this moment, that’s where this sits.  Brad may or may not have called a private team meeting to either announce he is leaving the Celtics or staying with the Celtics.

So we wait, and in that waiting there is hope.

For Indiana fans on their knees hoping for Brad to invigorate this sleeping giant of a basketball program – that will do for now.

Here are the tweets for your perusal:

Hearing from people who'd know former Butler coach Brad Stevens is gonna be announced as the new IU coach as soon as today…
thus completing a circle started a few yrs ago when former Hoosier star Damon Bailey randomly walked into a 2-on-2 game in Butler's Hinkle Fieldhouse. pic.twitter.com/U0KjCSR1dl

now i’ve never claimed to have sources, and i’m not in the business of breaking news but i do trust who just told me this and they said “brad stevens just called a private team meeting.” what about remains to be seen, but…