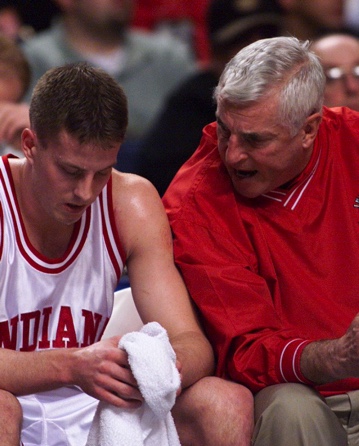 Sometimes learning is painful, but it always pays off – as it did for Dane Fife.

The insanity of a search for a new basketball coach at Indiana University is a lot like an Owen County cockfight.  The chickens all look the same, and the only winners are the beer salesmen in the black shirts.  That includes the chickens, because at some point in the afternoon they all wind up tossed into a pile next to where young children play catch with wadded empty cans of Natty Light.

Archie Miller became the latest chicken hurled onto the pile of carcasses, joining those of Tom Crean, Kelvin Sampson, Mike Davis, and Bob Knight.  This demise came because Miller believed so strongly in his own basketball ideology he was unable to adjust to the vagaries of Bloomington, the Big 10, and college basketball outside the Atlantic 10 Conference where he succeeded quite nicely.

Former athletic director Fred Glass rolled to the podium in his tricked out golf cart on that March day in 2017 to introduce Miller to fans and media as a “grand slam” hire.  After four years, Miller showed himself to be a routine fly ball to the opposite field.  His 33-43 Big 10 record, 0-7 mark against Purdue, and inability to earn an invitation to a single NCAA Tourney led new AD Scott Dolson to conclude only a new coach could restore hope in Bloomington.

And so the search, which began a week ago, landed first on Indiana favorite son candidate Brad Stevens, whose popularity has over-ripened in Boston in what appears to be his eighth non-championship season.  Stevens toyed with Indiana fans briefly with odes to the Hoosier state worthy of James Whitcomb Riley before finally referring to himself as a “Masshole” in a bizarre and inauthentic New England loyalty pledge.

With Stevens refusal to accept whatever offer may have been made to him, there has been a mad scramble of coaches – employed and retired – eager for the enormous payday Indiana will offer to secure the right coach, whatever that means this time.  Every man with a pulse and a whistle is reaching out to Dolson through intermediaries to declare his intention to rescue the Hoosiers.

John Beilein has crawled from his cryogenic chamber to begin the career thaw that could send him to Indiana to take one more swing at winning the national championship that alluded him at Michigan and West Virginia.  Thad Matta‘s chiropractor has worked himself into Carpal Tunnel Syndrome to try to align his vertebrae so he might enjoy showing players how to get in a defensive stance again.  Fans were enthusiastic about Texas Tech’s Chris Beard until his Red Raiders looked oddly Hoosier-esque in their ability to miss layups in yesterday’s loss to Arkansas.

The underdog candidate I have decided to champion is Dane Fife, assistant under Tom Izzo at Michigan State for the past decade.  Fife was a leader during Indiana’s improbable run to its last Final Four in 2002, and then coached at IPFW for six increasingly successful seasons – first as an independent and then member of the Summit League.

Fife was tireless in recruiting players to IPFW, a school no one wanted to play for 15 years ago – not even for free.  He showed up for every game my son’s AAU team played for their last two years.  Fife was joined by Stevens, then a little known assistant coach from Butler, at whatever time the team played.  At eight in the morning, there were Fife and Stevens.  At ten that night, there they were again.  They worked hard enough that Fife secured the services of point guard Ben Botts and Stevens netted Matt Howard and Zach Hahn.

In nearly empty gyms in Louisville, Houston, Durham, Indianapolis, and Fort Wayne is where and how coaching careers are built.  Botts was as critical to IPFW’s wins as Howard and Hahn were to Stevens and Butler.  Last week, Stevens said no.  This week, I want Fife to be the guy who says yes.

Fife understands Indiana.  He knows the basketball culture here as only an alumnus can, and he understands what it takes to win in the Big 10.  Hell, if he could win games as the coach of an independent in Fort Wayne, building a winner in Bloomington should be a given.

Some fans will carp on message boards about how Dolson should have brought a proven winner to Indiana.  They forget that Sampson, Crean, and Miller came to Indiana from successful programs.  Fans want to sprint down that dirt road to wrangle Porter Moser, Nate Oats, or Beard from the places where they already fit.

Just as Stevens did at Butler, Fife is going to win for some program smart enough to hire him.  He might be willing to wait for Izzo to retire to finally accept the gig at Michigan State, or maybe Dolson embraces this moment to reunite Fife with the program for which he still feels a strong affinity.

No one but Stevens would be able to win the press conference, so Dolson might as well hire the right coach.

Fans will bicker about how (insert coach’s name here) might have been better for Indiana than than Fife.  They will yell about how Beilein, Matta, Beard, or Moser should have been the hire – just as they bicker over which similarly feathered chicken emerged victorious as wagers are paid off in Owen County.

Dolson should stick to his guns and hire the coach he prefers.  If he’s going to be held accountable for the success or failure of the basketball program, and he will be, Dolson might as well get the coach he prefers instead of trying to win a press conference.

My guy is Dane.

6 thoughts on “Indiana Basketball – Forget the “proven winners” this time, give me the right fit – Dane Fife!”