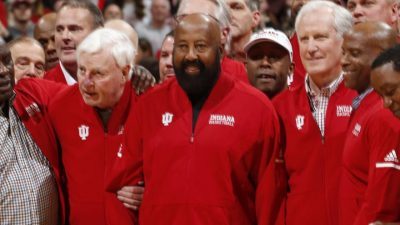 The Indiana Family is whole again with Mike Woodson as its leader.

That wouldn’t be enough at most universities as they introduce a new basketball coach, and it wasn’t enough at Indiana the last two times it’s gone through a regime change.  IU needed the fight song, allusions to previous and future banners, and guarantees of future success.  Minus all the pomp and circumstance yesterday, the unveiling was addition by subtraction; and it was glorious.

For so long it seemed Indiana was ashamed of its past, afraid to embrace what it was under Bob Knight, as though the national media has been correct in defining his 29 years in Bloomington with a chair, choke, and Chung interview misstep.  More important in evaluating Knight than the oft recited lowlights are the young men who graduated from his program into adulthood with lessons he instilled through relentless repetition and reinforcement.

Woodson is one of those young men, and his return to Bloomington felt right yesterday.  Explaining what that means to people unacquainted with the Hoosiers for all or part of the Knight era from 1971-2000 is difficult.  It’s like driving back to your hometown after moving away.  All of a sudden, things just click back into their rightful order.

After a generation of being sold and then sold again by charlatans who could have just as easily become mortgage brokers (no offense to mortgage brokers) as basketball coaches, Indiana came back to its roots of nonsense-free honesty from a man who would rather teach basketball than sell his message to the media.

The last two hires were announced with great fanfare and tremendous enthusiasm.  Yesterday’s Zoom meeting held in Assembly Hall’s media room was without fans, a pep band, a promise of banners, or even media.  Woodson was joined by members of his family, AD Scott Dolson, Thad Matta, Quinn Buckner, Scott May, and members of the late Wayne Radford’s family.  That was it – simple and sublime, just like the state, university and program.

Woodson said he’s come back to Indiana to teach young men the game of basketball, prepare them for adulthood, and win some games.  He’ll do that through holding them accountable and with a staff that might be the most experienced in the history of college basketball if Larry Brown joins.

Between Woodson, Matta, and Brown, Indiana players will have access to a century of championship level basketball coaching experience.  And that’s without any of the three assistant coaches allowed by the NCAA.

That staff is not only experienced and smart, they enjoy collaborating without tremendous ego.  That was the most apparent takeaway about Woodson yesterday – he has a rare humility for the position of basketball coach at Indiana University.  Not that he lacks confidence; he doesn’t.  What he lacks is arrogance, which is often driven by insecurity.  There was no hint of arrogance in the thoughts Woodson shared yesterday.  Coaches are there for the players, according to Woodson, not the other way around, despite previous evidence to the contrary in Bloomington.

Woodson is there to help – and be helped.  He never mentioned a specific win total, number of Big 10 championships, or banners to be hung.  Woodson knows it’s about process – recruiting high-character talent, instituting a minute by minute approach to extracting the highest level of work a student-athlete can muster, and then scheming to put them in the best position to win each possession.

Yesterday, Indiana took a major step toward a future that has a tantalizing chance to be successful with a product of its past leading the way.

After years and years of square pegs trying to change the size and shape of their program, Indiana finally found a fit.  And Indiana felt like Indiana again.