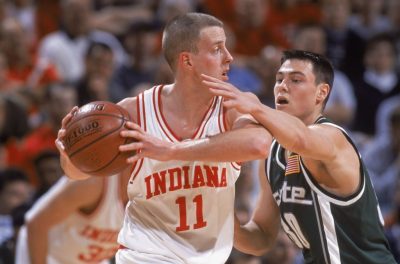 Fit means everything, and Dane Fife fits the Indiana Basketball program just like the beautiful #11 jersey he wore 20 years ago.

So many things that make sense are happening in Bloomington, I’m dizzy.

For years, Indiana Basketball authored head-scratching moment after head-scratching moment that just felt wrong.  From Mike Davis threatening to put names on the backs of uniforms, to losing Mike Conley and Greg Oden to Ohio State, to Tom Crean, to Hanner Mosqeura-Perea’s DUI, to Archie Miller, it seemed Indiana was determined to be anything other than what it had always been.

For fans, Indiana’s basketball program became the shoes that looked right, but were two sizes too small.

Over the last three weeks, suddenly the planets aligned to cause the powers that be to author a series of smart moves that began with the termination of coach Archie Miller, continued with the hire of IU alum and NBA coach Mike Woodson, and today brought back fellow IU alum Dane Fife from Michigan State, where he assisted Tom Izzo for the last eight years.

All of a sudden, the laces loosened, our toes extended, and we walked without that gnawing pain reminding us that things in Bloomington were all wrong.

Fife was among the candidates for the head coach gig that were championed by longtime IU fans because of his lineage as an IU player, but he is much more than an alumnus.  And now he will bring those gifts to the IU program as the second assistant announced by the program, joining recruiter Kenya Hunter – the lone holdover (so far) from Miller’s staff.

I met Dane 20 years ago at Nick’s in Bloomington at the end of a long night – at least it was for my wife and me.  I won’t get into the specifics, but he was funny, passionate, caring, and genuine that night.  Nothing has changed about him in the dozens of times our paths have crossed since.  On a staff led by Woodson, who by all accounts is a good man, Fife will fit right in.

At Indiana, the basketball program needs to be about more than basketball.  There is an expectation that 18-year-old boys become men at Indiana while also winning basketball games.  Dane cares about people and basketball in equal measure, and so he is a perfect fit for the program in the same way the William Tell Overture during the under eight second half timeout is a fit at Assembly Hall.

With a coaching staff that fits, it seems inevitable that current players in the transfer portal who fit will decide to stay, and recruits who fit will also pledge Hoosiers.

[After this was posted, Khristian Lander and Jordan Geronimo tweeted that they have pulled their names out of the transfer portal.  The good just keeps coming.  Still waiting on Armaan Franklin and Race Thompson to make their calls to stay or commit elsewhere.]

Fit is what happens when hiring decisions are made using something other than resume’s, blue ribbon committees, and search firms.  Hiring is equal part art and science, and athletic director Scott Dolson and Woodson have shown themselves well acquainted with that axiom.

Trying to explain this to people who don’t get it is futile, so when fans from other programs or national media kooks blather about how IU has lost its mind, just smile – because you know different.  Many will look at the numbers because data drives decision making in both business and sports.  But data alone does not generate wins any more than it does revenue.  Feel is critical, and those who don’t get that are doomed whatever their managerial position.

Woodson fits.  Fife fits.  Here come players who fit.  And with them – wins, maturity, and success.

These are heady times.  Time to pinch myself again.  Yep – I’m awake.