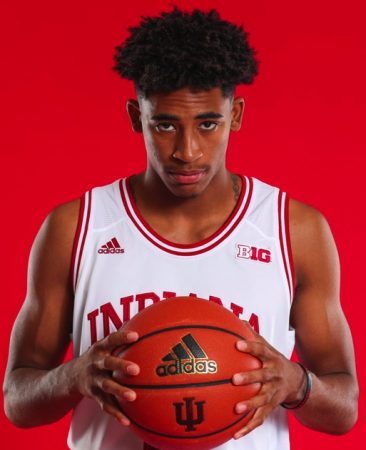 Armaan Franklin has a decision to make and I only hope to help by laying out the case for staying at Indiana.

Armaan Franklin is ruminating this afternoon.  The decision before him is this – where should I play college basketball for the next two years to put myself in the best position to make millions of dollars in the NBA?

Sure, there are other considerations like friendships, comfort in surroundings, geographic proximity to family, and loyalty, but lotto-esque wealth potential is THE factor that is keeping Franklin up nights as he decides what to do next.

That is as it should be despite his potential wealth not meaning a thing to Indiana fans, who would like the Hoosiers to return to relevance as soon as possible.  Franklin is a plug and play starter who can defend multiple positions and hit 42% from beyond the arc this past season.  Indiana might have finished 10th in the Big 10 with Franklin as a starter, but he is not the reason they finished 10th.

Before we judge Franklin as potentially disloyal, remember what you did when you faced a similar decision in your life.  A neighbor of mine moved his family to another state when he accepted a position with a rival company.  The difference in pay $10,000.  He had two kids and a wife.  All loved Indianapolis, but he rented a U-Haul as soon as the ink was dry on his contract.  For $10K.  Anyone who begrudges Franklin the time he is taking to weigh options when the choice could mean millions just isn’t processing information with empathy.

Given that, there are plenty of factors – both pro and con – in making this monumental decision.

Here are some of the criteria worthy of consideration that may compel Franklin to stay in Bloomington:

Mike Woodson, Thad Matta, and Larry Brown (assuming he comes to Bloomington) – Are these the best coaches to evaluate Franklin and then recommend a development plan to become a pro?  There is no magic elixir for becoming a first round pick in the NBA, but Woodson and Brown have shown themselves to be adept at recognizing and exploiting NBA talent.  Few staffs in college basketball have the pro basketball bandwidth to match Indiana.

Facilities – This is a red herring because the buildings don’t really matter.  As posh as Cook Hall is, there is no practical difference between it and similar buildings throughout the Big 10, ACC, SEC, and Big 12.  There is not a single NBA player who has a contract because of the building they worked out in on their college campus.

Heritage and fanbase fervor – This appears to be nonsense on the surface, but there is a practical reason to view Indiana University different from competitors.  If Franklin stays at Indiana, he will have a job for the rest of his life.  He will get jobs because of the brand he builds playing basketball at Indiana.  If he leaves, that goodwill evaporates.  If the NBA doesn’t work out, Franklin will need to work a straight job, and his diploma from IU and the connections because of it will give him a huge leg up in building a career.

Fit – We spent a lot of time talking about fit during the search that yielded Mike Woodson as Indiana’s 30th basketball coach.  Woodson fits, and in his introductory zoom availability he described the kind of players he will recruit to Bloomington.  He covets versatile defenders who can shoot.  What is Franklin?  A versatile defender who can shoot.  Franklin fits Indiana as well or better for Woodson than he did under the previous regime.

Path to NBA – I’m not claiming attending Indiana makes an NBA career more likely, but seven Hoosiers are currently on NBA rosters.  Among the three other schools competing for Franklin’s services according to message board rumors (I know, why invest in the deranged fanaticism of opposing programs as a source of information?), Illinois has no NBA players, Notre Dame has one, and Louisville has six.  They say it’s about the fight in the dog, not the dog in the fight.  Well, they should say it’s REALLY not about the house the dog lives in!  But, having Victor Oladipo, Cody Zeller, O.G. Anunoby, Juwan Morgan, Eric Gordon, Thomas Bryant, and Romeo Langford around during the summers to advise and consent is very valuable.

Friendships – This pales in comparison to the importance of cash and fulfilling the dream of playing in the NBA, but the absolute best thing I got out of Indiana University had zero to do with money or professional standing.  What continues to make my time at IU worthwhile are the people with whom I developed relationships.  I met my wife at Walnut Knolls Apartments, and the majority of my lifelong friendships were cultivated at IU.  I know friends can be made anywhere, but I question whether I would have been as successful in building relationships anywhere else – and it took a long time for those friendships to take root.  Two years would have left me with a bunch of acquaintances – not friends.

It’s up to Armaan to make his choice, and if he needs to ponder his lists of criteria and priorities to make him feel good about it, he should take all the time he needs.

If he stays with Indiana, great.  Good for him.  If he leaves, I hope he finds what he is looking for, but changing zip codes does not often make dreams reality.  Wishes come true because of sacrifices not relocating.

13 thoughts on “Armaan Franklin’s decision comes down to six factors, with cash being chief among them”