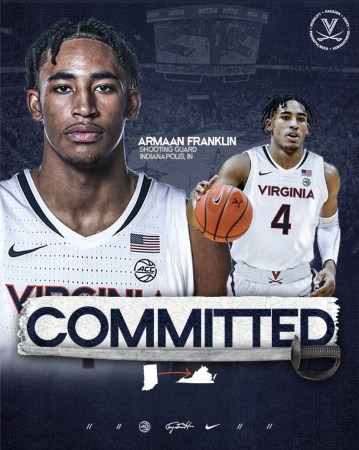 Let’s try to be happy for Armaan Franklin as he transfers to Virgina rather than bitter about his departure from IU.

Armaan Franklin decided to leave Indiana Basketball to play and study at the University of Virginia, and I don’t blame him.

Fans lose their minds when a student-athlete transfers as though it represents an abandonment of all that is holy.  That’s especially true at a place like Indiana.  IU fans look at the opportunity to play for the Hoosiers as a higher calling – a chance to represent the program of Leonard, Bellamy, Knight, May, Buckner, Benson, Woodson, Thomas, Alford, Cheaney, Jeffries, Gordon, Watford, Hulls, Oladipo, Ferrell, and Anunoby.

While being a part of that illustrious fraternity is nice, it’s not the equal of getting a degree from the university Thomas Jefferson founded and designed.  And let’s remember that despite excitement over the Mike Woodson hire, Thad Matta‘s addition to the staff, and Dane Fife coming home, it has been 34 years since IU hung a real banner.  UVA won a National Championship in 2019.

It would have been nice to see what Indiana might have done with Franklin as exactly the type of player Woodson claimed to covet during his Zoom introduction to the media – long and versatile defender who can knock down threes.  Franklin isn’t the dynamic athlete that puts a program over the top, but he is the kind of young man and player that teams cannot win without.

The deal is done, and if Franklin hopes to follow in the footsteps of Pacers guard Malcom Brogdon as a player and man, where better to do that than at his alma mater?

Sane Indiana fans, to the extent they exist, will understand this decision and harbor no ill will toward Franklin.  He’s a good player and guy who made a decision that many would envy given the same circumstances.

I hope transferring to Virginia makes all of Franklin’s dreams come true – minus an NCAA Championship at Indiana’s expense.