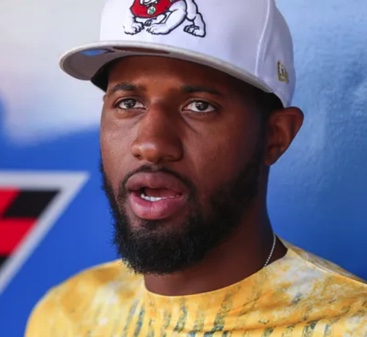 Paul George publicly declaring his hope to lead the Pacers to a championship was trumped by his concurrent desire to be traded.

Some cities vibe will self-important duplicitous athletes.  Indianapolis is not one of them.

Paul George evolved during his time as an Indiana Pacers from humble rookie who wanted to fit in with his new teammates and city into a diva who created his own nickname and embraced his brand as more valuable than his relationship with the team or fans.

He returns tonight to the building that served as his home arena for the first seven years of his career, and he will hear boos.  That’s unusual for an athlete returning to Indianapolis.  Lance Stephenson, Antonio Davis, Peyton Manning, Mark Jackson, Edgerrin James, and many others received warm welcomes when they came back to the place where they started their professional careers.  George will never enjoy that kind of ovation.

People will misjudge the boos as the reaction of fans disenchanted with a player who rejected their team and city.  It’s actually the response to the lies George told on his way out the door.  The truth was never more important to George than how the message would be received.  He said what he thought people wanted to hear, misjudging the importance of honor and trust.

“I am all about trying to make this team better,” George said at the Caroline Symmes Celebrity Softball Challenge on June 15, 2017.  “I want that ring. I need some help to get that accomplished.  I’m a Pacer.  There’s no way around that. This is my team, my group, and this is where I’m at… It’s all about bringing a championship to Indiana.”

Two weeks later, the Pacers accomodated George’s request to be traded.  He went to the Oklahoma City Thunder for Victor Oladipo and Domas Sabonis.  Since then, he made a similar pledge to remain in OKC before being dealt again to his hometown Los Angeles Clippers.

Pacers fans would have understood if at the softball game, George said, “Look, I love and appreciate Indianapolis, but it has always been my dream to play in my hometown.  When I am a free agent, I am going to pursue a deal in LA.  I would love to finish my contract here, but if the Pacers can get a solid deal for me, I’m good with that.  Indy and the Pacers will always be close to my heart, but I want to play in my hometown.”

That would have been an honest expression of George’s career desire.  People would have been disappointed, but understood.  People from Indianapolis know what it is like to love their hometown and would have empathized with George’s desire to indulge that dream, but telling the truth in a way people will understand is not George’s way.  The truth is not a priority with him.  He says what he believes people want to hear regardless of what he knows to be true.

Indy is not butt-hurt over George’s desire to go home to play in more familiar environs.  People in Indiana are honest by nature, and they respect those who share their penchant for the truth.

And so tonight at Bankers Life Fieldhouse, George will be booed – not his desire to go home, but for his lies.