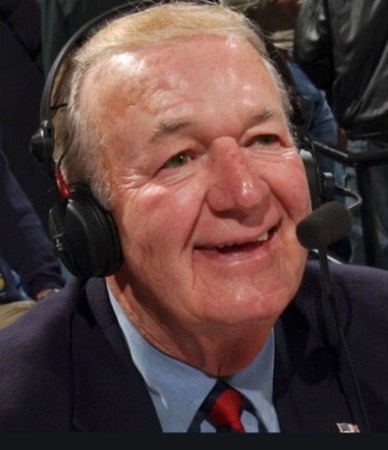 Has there ever been a person who smiled more than Slick Leonard – or had more reason to?

Slick Leonard channeled his athleticism into the 1953 National Championship at Indiana University and a seven-year NBA career, his leadership into three ABA championships with the Indiana Pacers, his audacity into successful efforts to keep the Pacers in Indianapolis, his charisma and enthusiasm into a 35 year career as a broadcaster, and his love of people into thousands of friendships.

Those three entities have made possible Indy hosting the Super Bowl, many Final Fours, even more Big 10 Tournaments, NBA Finals, and an upcoming college football national championship and NBA All-Star Weekend .  Without sports, Indy’s downtown would be a wasteland – as it was until critical mass was met here over the last 20 years.

The Pacers, Colts, and NCAA, along with the Indianapolis Motor Speedway, are the pillars of Indy’s sports driven ecosystem, and they have helped elevate this city into one of the most livable in America.  Without Slick and Nancy, three of those four would be helping another city thrive.

So that’s Slick’s (and Nancy’s) practical impact on Indianapolis, but as important as they have been to Indianapolis’s economic growth, Slick may have exceeded that impact through his kindness and generosity.  There are very few people in Indianapolis without a story about Slick taking time to enjoy a conversation which made them feel special.

Slick was one of the most comfortable-in-his-skin people in the history of humanity.  He did his best to squeeze the last drop of fun and compassion he could out of each day, and then slept well so he could do it again.  He never took for granted the love strangers felt for him, and he made sure they never felt less important to him than he was to them.

As a broadcaster, Slick brought emotion, insight, and fun to radio calls of Pacers games.  It is impossible to think of Reggie Miller‘s hall of fame worthy contributions to the Pacers without hearing Slick yell “Boom Baby!”  That signature call wasn’t concocted during a brainstorm in some fancy conference room; it was an organic expression of joy that accompanied every three-pointer a Pacer made.

There are deaths that are mourned for coming too early, and lives celebrated for their triumphs.  Slick’s passing manages to evoke both.  Despite being 88, Slick was still schooling up fans about the Pacers last weekend with Eddie White on 107.5 the Fan.  His kindness and friendship will be missed, but the effect his presence had on those who knew him – or simply met him – as well as the economy of his city will be felt forever.

All of us view the sum value of our lives differently.  Some try to live with joy and generosity each day so others may enjoy life more.  Some try to impact the economy so others might be provided for.  Some throw all their resources into raising a family so their children can achieve their dreams.  Still others measure their success through how often they and those around them laugh.  Somehow, Slick managed to check all those boxes.

It’s traditional to lament the death of those we love or admire as a loss.  That’s not necessary or even possible with Slick.  Our memory of a truly great man will keep him with us – always.  His life will tangibly affect Indianapolis – forever.  His example will be there for us to try to live up to as long as we live.

That’s a hell of a legacy.

Slick Leonard may no longer walk among us, but he will ALWAYS be here.

2 thoughts on “Slick Leonard’s exemplary life has ended, but his impact will be felt in Indiana forever”