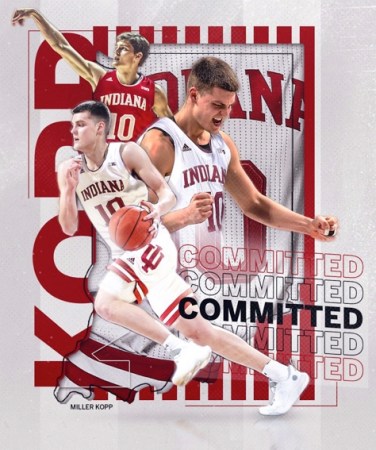 Indiana Basketball has had a monstrous 23 days that is fueling a return to relevance and championship contention among fans!

Mike Woodson was hired as coach on March 28, and he has crafted a furious rebuild of his staff and roster that has people in Indiana wondering what might happen if Woodson is as good at in-game strategy as attracting talent to Bloomington.

The news hasn’t been all good for Woodson and the Hoosiers, but the losses have been offset by almost immediate gains.  No one wanted to see Armaan Franklin leave for Virginia last week, but he was replaced yesterday by Tamar Bates – a very talented wing in the class of 2021 who can shoot, drive, defend, and communicate loudly on the defensive end.  Joey Brunk‘s transfer to Ohio State was unpleasant, but Northwestern’s Miller Kopp announced his commitment to Indiana this morning.

Kopp and Brunk are different players at different positions, but would you rather have a 6’7″ healthy senior-to-be who can flat shoot or a 6’11” sixth year senior coming off back surgery?  Brunk is a great guy, and we wish him success at Ohio State, but Kopp makes threes!

Most importantly third-team All-American Trayce Jackson-Davis will be back for his third season in Bloomington to hone his game for the NBA and lead Indiana back to some measure of respect in the Big 10 and beyond.

The staff is robust.  Three-time Big 10 coach of the year Thad Matta joined the program in an administrative role.  Dane Fife rolled four hours south from East Lansing on I-69 to join the fun in Bloomington an an assistant.  Yasir Rosemond was hired to complete the staff last week.

I don’t know how all this will work when the season starts, but for now, different is good.  Indiana’s reality has been bad for five years, so a pivot in any direction represents reason for hope, and that is what the offseason is for.

Some other day, we will have a serious conversation about how Kopp played for 13-19, 8-23, and 9-15 teams at Northwestern, and how Johnson left his Pitt team with a few games left on the schedule.  There are other reasons for a reality check as we assess the future of the Hoosiers, but late April is never the time to indulge in cynicism – or even realism.  The next five or six months are for the dreamers among us.

Today, it’s “Miller Kopp is coming to Indiana!”  In December, our ebullience might be tempered.  After all, who wasn’t equally thrilled when Evan Fitzner – (remember him?) – decided to transfer to IU in 2018?

April is the time for Hoosier hopes to be highest.  Maybe one day reality will fulfill hopes.  Maybe Bates will be the Big 10 Freshman of the Year.  Maybe Kopp will hit 45% from beyond the arc.  Maybe Lander will become a consistent contributor.  Maybe Rob Phinisee will make Fife look brilliant by becoming the Big 10 Defensive Player of the Year.  Maybe Jackson-Davis will develop a three-point shot and earn a spot in the first round of the 2022 NBA Draft.  Maybe Woodson will be the National Coach of the Year after leading Indiana to a Big 10 Championship.

These are all fun thoughts to have now.  It’s late April – the time for fanciful hoop dreams.

But those Hoosiers – new and old – need to work long and hard beginning right now to turn fans’ idle hallucinations into reality.  They must not mistake well-wishes and strangely optimistic social media posts for accomplishment.

Indiana fans are not nearly as patient after a six game losing streak in February as they are while winning the offseason in April.