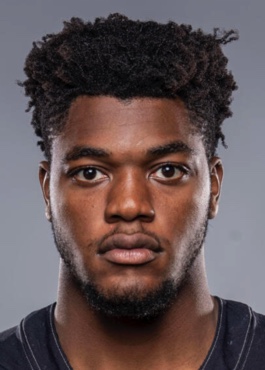 Dayo Odeyingbo was big, fast, and twitchy until he tore his Achilles. The quicker he heals, the better the 2021 Colts Draft will look.

Some years, the NFL Draft cooperates for a team, and other years it doesn’t.  For the Indianapolis Colts, the 2021 NFL Draft appears to be the latter.

It’s three years too soon to cast judgment on Colts general manager Chris Ballard and his staff for their weekend’s worknselecting seven players in the 2021 Draft, but we know two things about their haul for sure – of the first 126 players selected, the Colts got one who will contribute in the 2021 season.  Second, they did not get address their glaring need for a starting left tackle.

Kwity Paye may wind up being exactly the edge rush defensive end the Colts desperately need.  It was the top priority in this draft because without pressure, opposing quarterbacks carve up the Colts.  Paye may wind up defying the odds and helping win games as a game-wrecking rookie at a position that normally requires a couple of years to learn.  Fellow defensive end Dayo Odeyingbo, taken with the 54th overall pick, will be kept from doing meaningful work as he recovers from an Achilles tear suffered in January.

The Colts third round pick was part of the compensation for acquiring Carson Wentz from the Eagles, so nothing to look forward to there.  In the fourth, the Colts took a tight end who is said to have great feet and lousy hands.  Later they acquired a safety out of Florida named Shawn Davis, quarterback Sam Ehlinger from Texas, and in the seventh round a very tall wide receiver and stout guard from Penn State.

It’s very unlikely a seventh rounder assumes a key role on a playoff bound team or Ehlinger will see the field as a third quarterback behind Wentz and backup Jacob Eason.  That leaves the tight end and Davis as members of this rookie class who could help elevate the Colts roster into a division championship, and maybe a playoff run.

There is some talk that Ehlinger could perform as a Tayson Hill-esque hybrid.  Anything is possible, but Ehlinger’s 40 time was 4.8 – not bad for a quarterback – while Hill’s was a crackling 4.44.  Maybe Ehlinger is an improvement over Jacoby Brissett as a sneak artist on third or fourth and short, but coach Frank Reich is unlikely to split him out wide.

One piece of good news for Colts fans, Ballard ended his streak of selecting cornerbacks with slower than 4.5 40-yard-dash times in the second round of odd year drafts.

The bad news is the Colts do not yet have a starting level left tackle on the roster, unless owner Jim Irsay, Ballard, and Reich misrepresent reality when they tell us the other four linemen will remain as their positions.  They claim comfort with Sam Tevi, who signed as a free agent after starting for the Chargers.

Before you invest in hope that Tevi can do the job, it is instructive to know he ranked 30th and last by Pro Football Focus among all tackles with more than 1,000 offensive snaps last season, and second to last as a run blocker among all tackles who were on the field for at least one running play.  PFF is imperfect as a tool to grade play level, but not so flawed as to represent a good tackle as poor or vice versa.

Sometimes, a GM gets the draft, and sometimes the draft gets the GM.  God knows what this draft will look like in 2023, after Odeyingbo heals.  He and Paye could be bookend edge guys along the lines of Dwight Freeney and Robert Mathis.  They could lead the Colts to a championship – or they might not.

As Paye and Odeyingbo go, so will go the opinion of Ballard’s work in this draft in minds of Colts fans.