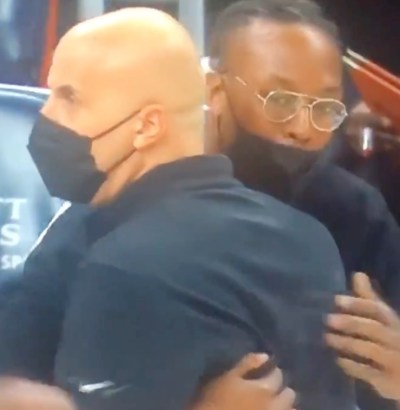 There is no putting this genie back in the bottle, and you can pick your genie among Pacers center Goga Bitadze, assistant coach Greg Foster, and head coach Nate Bjorkgren.

When ESPN’s Adrian Wojnarowski writes that a team is in turmoil because of a head coach’s communication issues, the last thing that team needs is for the turmoil to turn devolve into chaos.

That’s what happened during last night’s Indiana Pacers home loss to the Sacramento Kings.  After Bitadze allowed Mo Harkless to dunk unopposed in the third quarter, Foster was understandably displeased.  On the other end, Bitadze hit a three and then turned to Foster and told him to “sit the f*&$ down.”  Foster stood, forcefully responded, and the team came between the two before the shouting could escalate into a physical confrontation.

After the game, Bjorkgren told the media, “We’re in a frustrating stretch here.  A lot going on with the challenges of navigating through a season. The competitive juices are flowing and things like that will happen.”  No.  Things like that do not happen, not publicly…not during a game.

That internal hysteria is not indicative of a team or coaching staff that respects one another.  Players do not admonish coaches so publicly, and assistants do not step brazenly in front of a beleaguered head coach to dress down a player.  Behind closed doors, all kinds of things happen.  There are occasional fights and frequent arguments on every team.  Over the course of a 72-game season in the midst of a pandemic, tensions will be high, but public displays of intense internal acrimony this outrageous are unfathomable.

Even in the great hockey movie Slapshot, Ned Braden (Michael Ontkean) saved his criticism of player-coach Reg Dunlop (Paul Newman) for the locker room and team bus.  That movie depicted professional sports insanity at the highest level.   The Pacers trumped it last night.

To say what happened reflects poorly on Bjorkgren’s leadership is a massive understatement.  It shows a cultural lack of respect for authority from everyone involved, and as one of the most stable organizations in professional sports last night seemed a bizarre lapse.  If that is what we see during televised games, imagine what mayhem is routine in the locker room and during practice!

On the positive side, the Pacers are finally interesting.  Their style of play is a tough watch, the defense is non-existent, and their 30-35 record is as blah as blah gets.  But now there is a reason to tune in tonight as they take on a very good Atlanta Hawks team, led by former coach Nate “the Sarge” McMillan.

Say what you will about McMillan running an antiquated offense that led to postseason failures.  That dust up between Bitadze and Foster never would have happened on his watch.  And after winning 57.4% of his games in four years with the Pacers, his Hawks have won at a 69.7% clip after he took over for Lloyd Pierce who was fired with a 14-20 record.

The questions Woj advanced about Bjorkgren’s future with the Pacers appear to have been answered.  The horses have broken loose from the barn, the genie is out of the bottle, and a franchise that has been a model of stability for 35 years appears to be adrift without a culture to guide it.

[An hour after this story posted, the Pacers issued this release:  “The Indiana Pacers announced Thursday they have fined center Goga Bitadze and suspended assistant coach Greg Foster for one game due to their in-game conduct during Wednesday night’s game.  This is an internal team matter and no further details will be released.”]