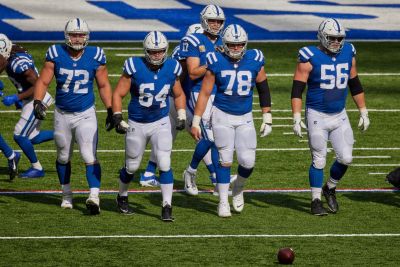 The Colts offensive line a five-man collective that wins succeeds of fails as a group to give the team a chance to win.

“Whatever the team needs,” is a refrain often heard from members of the Indianapolis Colts offensive line when they speak to the media.  When they are asked by the media to indulge in a little egomaniacal self-praise, they defer with a disdainful smirk.

Quenton Nelson was asked Monday to comment on his potential legacy as the best left guard to play in the NFL, and he was clearly annoyed.  When baited yesterday to whine about not being named to the Pro Bowl, right tackle Braden Smith was similarly curt and perturbed.

If you asked NFL fans not in Indianapolis who plays right guard for the Colts, very few would know his name is Mark Glowinski, and that is the way Glowinski likes it.  All the cash and camaraderie with none of the fame is not a terrible recipe for a happy life.

Team sports is fascinating because there can be a great temptation to behave with selfishness, but the greatest team rewards are reserved for those who subvert egotism for the collective good.  Lombardi Trophies are usually won by teams of talented men willing to put what is good for the team ahead of personal glory.

The Colts o-line appears filled with selfless behemoths dedicated to each other more than individual accolades.

They remind me of the scene in the film A Beautiful Mind where four geniuses are in a bar trying to figure out how to approach a gorgeous woman surrounded by four average looking girlfriends.  It occurs to the head genius, John Nash played by Russell Crowe, that if the four guys all pursue the hottie, none will earn a date.  But if the four geniuses ignore the beauty and offer to pair up with the remaining average looking woman, all can succeed.

That is an example of Nash equilibrium, a concept that won him a variety of prizes and awards given to people with giant brains.  It also won Crowe an Oscar.

The key to Nash equilibrium being successful is that all parties must be trusted not to abandon the collective to chase their selfish desires.  It appears the Colts o-line subscribes to Nash equilibrium.  The result is not dates, but opening holes for running backs and creating a pocket to protect that quarterback that lead to wins against less selfless NFL teams.

Offensive linemen are helped toward this holistic vein of behavior because they are compensated for collective success rather than individual statistics.  The stats for offensive linemen are collective – as in sacks allowed and yards rushing.  There are methods for rating blocking effectiveness, but they are not as simply applied or understood as yards and touchdowns.

Ryan Kelly is among the NFL’s highest paid centers in part because of the play of his four line mates.  The same will be true for Quenton Nelson and Braden Smith when they sign their extensions.  Linemen tend to sink or swim together, and so they are the most likely position group to embrace group excellence as their driving motivation.

For wide receivers, compensatory calculus is data driven.  Lots of catches and yards equals lots of cash.  Salary level is not victory contingent for receivers, so divas are either created or nurtured.  Quarterbacks are in the same boat.  Rams QB Matthew Stafford has yet to win a playoff game, and yet he has earned $226M in his 12-year career.  How about “Always Angry Andy” Dalton?  No reason for him to be angry about making $86M for his zero playoff wins.  And he’ll get another $10M this year for not making the playoffs with the Bears.

The Colts offensive line collective spirit wins plays, games, and may one day be responsible for a championship.  They can’t do it without the individual greatness of receivers, quarterbacks, and defensive ends, but the divas can’t win without the group up front that makes all those passes, catches, and runs possible.

That’s the genius of football.

One thought on “Colts offensive line is filled with five big bodies, 10 quick feet, and one beautiful and selfless spirit”