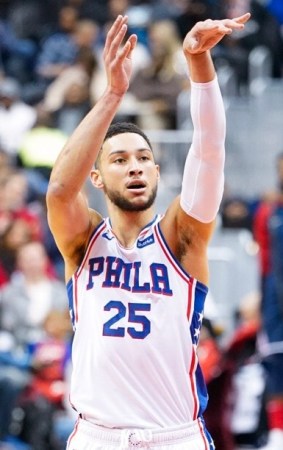 Can’t see the ball in this photo, but I’ll wager it never touched the twine.

“If you can’t shoot, you can’t play,” said every basketball coach in the history of the game.

After making only 25 of 73 free throws during the playoffs, it’s clear Philadelphia 76ers guard Ben Simmons can’t shoot.  For those willing to give Simmons a pass, it’s also worth noting that in four NBA seasons, he has taken only 34 three pointers and made five.

76ers coach Doc Rivers said yesterday that Simmons will enjoy an offseason of intensive skills development, which translate to a whole lot of shooting.  Some analysts are even speculating that lefty Simmons will switch hands to shoot with his right hand.

Two damning stats beyond his shooting percentage to keep in mind – first, Simmons will turn 25 in less than one month.  Basketball players rarely learn to shoot after they turn 25.  Second, Simmons is guaranteed $140,400,000 over the next four years regardless of how many free throws he misses.

The toughest part of buying a scenario where a 25-year-old suddenly becomes a competent shooter is that Simmons hasn’t been trying to avoid shooting well for years.  He works at it already, so why is this go-round going to be any different?

Experts speculate the 76ers will trade Simmons because they feel winning a championship is impossible with a point guard who can’t shoot.  That begs the question, why would another team trade value back to the 76ers for a $35.1M per year point guard who just hit 34% from the line over the course of two playoff series?  Good question.

Unless the 76ers find a moron among the other 29 guys running NBA franchises, they are stuck with an expensive non-shooter who tantalizes with what he does as well as anyone (defend and pass).

The most likely result of this gambit to teach or trade Simmons is a rinse and repeat of what we saw this postseason.  The 76ers are stuck because they overpaid for a guy who can’t do the one thing great basketball players absolutely must be able to do.