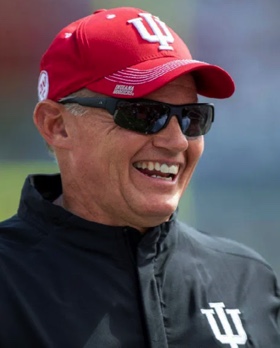 Tom Allen is trying to lead Indiana fans out of a 75 year fast.

Indiana fans are the Trappist Monks of college football, and their old habits die hard.

Trappist Monks forego all measures of life’s enjoyable indulgences as they attempt to achieve enlightenment.  At some point, Trappists forget all about the delicacies they left behind.  They adapt to the new normal lacking all those things we covet that put smiles on our faces.

Fans of the Hoosiers have gone so long without consistent winning, they have adapted quite nicely to meager expectations.  Instead of game days filled with hope for victory, they tailgate with enthusiasm, laugh while reconnecting with friends, wander into Memorial Stadium at the end of the first quarter, leave for Nick’s at halftime, and keep one eye on the game on TV and the other on their game of Sink the Biz.

Memorial Stadium hasn’t been full in years – other than Ohio State visits where Buckeye fans (and their money) are welcomed in droves.  Indiana fans have been satisfied with this arrangement as they vow to win the party if not the game.

When Indiana loses, fans shrug and enjoy the rest of their day.  It’s been that way for as long as anybody can remember.  Sure, there are promises of making the trip to Pasadena for the Rose Bowl when the Hoosiers find their way back, but just like the Trappists might dream of a steak dinner with a nice lady one day, fans know it’s just a dream.  No one actually buys tickets or makes hotel reservations.

But something has changed down in Bloomington.  Now fans are trying to adjust to the possibility that competence and winning football might be a regular part of their lives.  For the first time in more than 30 years, Indiana has posted back-to-back winning Big 10 seasons.  If the Hoosiers manage a third straight winning season, it will be for the first time since before the Big 10 was called the Big 10.

Back in 1946,  Indiana was among its better teams in the Western Conference, led to a 4-2 record by Bo McMillan.  That was 75 years ago, and if you were a student at Indiana during those halcyon days, you are at least 93 years old today.

Now in 2021, Indiana might bring back that glory, and fans may have to get used to a new routine where an afternoon inside Memorial Stadium lasts longer than the time it takes to play the second quarter, Nick’s can wait until after the game, and a reservation in Pasadena or wherever the College Football Playoff might be played is worth making.

There have been a few false starts for Indiana in the past – the 1967 Rose Bowl team, the 1979 Holiday Bowl team, and Bill Mallory’s teams from 1987 through 1993 among them, so excuse long time fans if they are wary of buying into Tom Allen’s L.E.O. driven resurgence.

Once a Trappist gives up red meat for long enough, eating a steak can cause explosive digestive distress.  The same thing happens with a sports fans exposed to relentless failure.  Winning requires a change in constitution, and Hoosiers might be in for just such a change.

The fast might just be over for Indiana fans, but just in case Nick’s will keep its lights on and buckets at the ready!