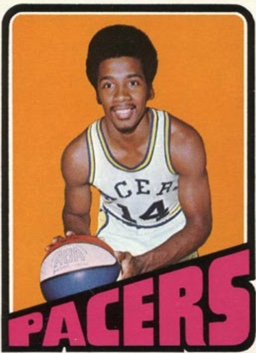 Today’s Pro Basketball Stathead email mentioned that today is the 78th birthday of Indiana Pacers legend Freddie Lewis, so I clicked into the basketball-reference website to scan through Lewis’s stats.

My day goes like that once in a while when I have some free time.  The sports reference sites are endlessly entertaining and provide an infinite amount of interesting facts to consume about professional and college sports history.

What caught my eye today was Lewis’s presence on a fascinating ABA team.  It wasn’t the three championship teams of the ABA Pacers for whom he played, but the 1975-1976 Spirits of St. Louis – a group that finished 35-49 and did not qualify for the playoffs.

This was the final season for the Spirits and the ABA, and St. Louis fans cheered for a team that featured a fascinating array of familiar names:

Nothing like 20 minutes spent clicking through Freddy Lewis’s bio page to kill 20 minutes on a rainy Thursday morning while we wait for Colts Camp, the NBA Finals, and Big 10 Football!

Hard to believe the Spirits lost so many games with this well-known group.  It’s also hard to imagine what I might learn if the rain doesn’t stop as the clicking may never end.

One thought on “Pacers legend Freddie Lewis celebrating a birthday – which sent me down a worm hole!”