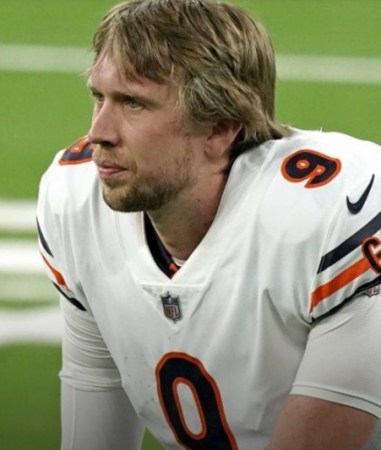 No matter how unhappy Nick Foles is in Chicago, he’ll need to take a painful financial haircut to buy his way out of town.

Every NFL team is going to break camp with at least two quarterbacks on its roster for a total of 64 quarterbacks who will be employed by their current team.  That means any QB the Colts might sign will be outside the top 64 in pro football.

The 65th best NFL quarterback is not going to help the Colts win at a meaningful level, so sticking with what they have makes sense if it becomes necessary for starter Carson Wentz to miss a week or two of the regular season.

Neither backup really distinguished himself in yesterday’s preseason opener against the Carolina Panthers, so the talk of selecting a potential Game One starter from the pile of dilapidated vets has begun anew.

Colts fans remember the grim start for Scott Tolzien in 2017.  He looked as though he was a guy who bought a chance to play an NFL game in a silent auction for charity.  Tolzien was panicky, inaccurate, and pitiful as he flung errant passes to Rams defenders.  Jacoby Brissett had been acquired a couple of weeks before and he elevated Colts quarterback play to mediocre.

The trade to acquire Brissett from the New England Patriots cost the Colts wide receiver Phillip Dorsett – a speedy 2015 first round draft pick who was an odd fit for the culture general manager Chris Ballard was trying to create.  Brissett wound up being good enough to get you beat, so he’s now a member of the Miami Dolphins backing up Tua.

The Colts learned their lesson.  It’s not enough to not suck.  To win enough games to qualify for the playoffs, teams need good to great quarterback play.  Might an old head like Brian Hoyer or Nick Foles win a game or two more than Eason or Ehlinger?  Maybe, but that’s not the level at which a quarterback needs to contribute to his team’s success.

Foles is a unique case because Reich coached him to a Super Bowl championship as he filled in for Wentz in 2017.  He is currently and unhappily employed by the Chicago Bears as the third stringer behind “Always Angry” Andy Dalton and rookie Justin Fields.  Why would the Bears continue to write check to Foles when he is clearly not in their plans as an option to start or back-up the starter?  Because he has a contract no one wants to take on.

Foles is guaranteed $4 million in salary this season with a dead cap number of $14.3M.  Next season, he is due another $4 million and a cap hit of $10.7M.  If your brain is too scrambled in order to make sense of all that math, the simple explanation is Foles will remain a Bear – or get paid a lot of cash on his way out of Lake Forest.  What won’t happen is Foles being traded somewhere else without a restructuring of his contract in a way that makes zero financial sense (to him).

So Ballard is saying a Rosary every night for the rapid healing of Wentz’s formerly defective foot and the quick development of either Eason or Ehlinger as a stop gap because Brissett is not walking through that door.