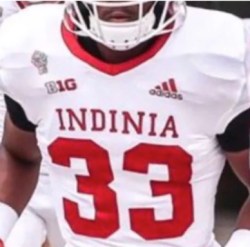 A college football fanbase accustomed to comical levels of disappointment had a good laugh at it’s own expense Saturday – and it had nothing to do with bad football.

The recency bias that enticed Indiana fans to buy into the belief that their football program had turned a corner toward repeatable respectability was flawed – as is the case with most recency biases.

The Hoosiers were outclassed, out-executed, and out-fought by Iowa Saturday afternoon in their season opening 34-6 debacle.

Now, Indiana fans need to fight another recency bias – the one that syncs with the historical bias  that has driven college football’s lowest expectations for the past 70 years.  The Hoosiers are supposed to suck.  Fans are supposed to leave Memorial Stadium at halftime to return to their tailgate or walk to Nick’s Bar a mile south of the stadium.

There have been a few successes that led Hoosiers to the brink of optimism, and last season’s 6-1 Big 10 record qualified, but the overall pattern since the Korean War has been short bursts of winning followed by extended droughts of misery.

But if one magical season during a pandemic was not a reason to invest significant hope in the Indiana’s future, why would one pathetic effort destroy it.

Fans should rein in their self-loathing for darting to hope the Covid season was a real approximation of the quality of Tom Allen’s program.  We are all looking for a reason to believe in goodness rather than argue about vaccines and politics, so forgive yourself for this apparent gullibility.  This was only one game of a regular season that will feature 11 more, including a visit from the Idaho Vandals Saturday night.

Idaho beat Simon Frazier 68-0 in its season opener, but until my research determines whether Simon Frazier is a college or bespectacled lab assistant, I will reserve judgment of IU’s next opponent’s capacity to cause problems.

This is a long season and it won’t be defined by a single game – even one as unimpressive as Indiana’s against the Hawkeyes.  There are three opportunities for vengeance against ranked opponents coming up.  Cincinnati, Penn State, and Ohio State offer Indiana chances to make good their promises for continued ascension.

The loss in Iowa made apparent IU’s inability to create holes for running back Stephen Carr or pockets for quarterback Michael Penix.  It’s hard to imagine that being fixed in time to provide a challenge for Cincinnati on September 18th, but giving up hope is not an option.

Indiana fans have been living on a diet of hope, beer, and stromboli’s for longer than we have been alive, and I wouldn’t change a thing.  If disappointment is defined by an Indiana loss being experience by old friends being served delicious food and cold beverages – sign me up.

I can live with another season of losing like that, so why not hope for the best as we acknowledge that losing is so enjoyable.