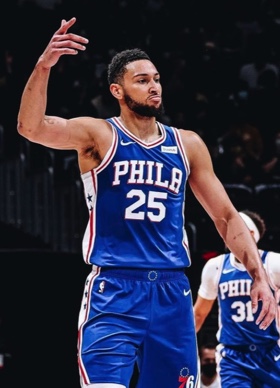 Ben Simmons is as poor at maintaining his public image as he is shooting threes.

The NBA has an image problem as safe harbor for self-immersed fools, and Philadelphia 76ers point guard Ben Simmons didn’t change it today.

It is being reported that Simmons has told the team he will not report to training camp and will never wear a 76ers jersey again.  He is under contract with the Sixers for another four years and a grand total of $147 million.

That’s right, Simmons has been so egregiously insulted by the Sixers that he will put at risk that staggering amount of cash to avoid playing basketball 82 times this season for a team and city where he doesn’t feel appreciated.

As the country battles a virus, businesses close, and people default on mortgages, Simmons cannot muster the will to play basketball for roughly $37 million per year.

Did I mention Simmons can’t shoot?  It’s true.  This 25-year-old reluctant superstar has made all of five of his 34 three-point shots in his four years in the NBA.  His career free throw percentage hovers just above 60%.  Yet he feels aggrieved enough to forego a reported $227,613 every game he skips.

Simmons should hit his knees each night to thank whatever deity he worships for living in a world where he can earn absurd wealth while being terrible at the most important thing in the game he plays.  He’s among the luckiest people on Earth, but refuses to acknowledge that – oranything but the minor insults that cause his dismay.

And if I’m Sixers general manager Daryl Morey, I allow Simmons to sit.  At some point, the leader of a business must communicate clearly that there is a level of greed-fueled idiocy he can not abide.  Simmons has launched a shot from that line that has finally hit nothing but net.