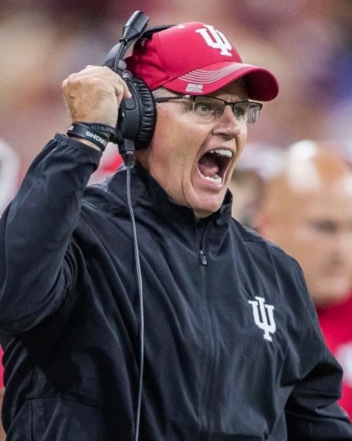 The air in the Indiana Football balloon escaped at halftime of the 38-24 loss to Cincinnati.  IU still led 14-10, but anyone who has been around the Hoosiers knew what was about to happen.

Memorial Stadium, earlier packed to the corners for the only time in 30 years for a game not against Ohio State, became sparsely populated again as fans chose to seek an environment they could control.  As Indiana fans know better than anyone, there are no losers at a tailgate party or Nick’s.

Immediately after the game and parties ended, my mind wandered to basketball.  That may seem unfair to the football program coming off a 6-2 season, but old habits are hard to break.  Fans can only be disappointed so many times before developing protective mechanisms against future misery.

“Can Michael Penix stay healthy” has become “Can Trayce Jackson-Davis dominate the Big 10?”  That’s Indiana.  I’ve even caught myself asking whether Ali Patberg can lead IU’s women’s basketball program to the Final Four.  That’s an unprecedented level of abandonment for football in my decades as an Indiana fan.  I suspected the 6-2 mark was Covid aided, so pivoting back to this familiar territory was inevitable.

It’s comfortable to get excited about Indiana Basketball in a way that doesn’t happen with football.  Despite IU not going to a Final Four since 2002 and not cutting down the nets at the NCAA Tournament in 34 years, the program has shown occasional signs of life never apparent across the parking lot at Memorial Stadium.

Mike Woodson returning to Bloomington to try to get things straight has given fans a legitimate reason to believe brighter days are finally possible.  There is rational reason for hope as the first Bob Knight disciple has returned to the big chair at Simon Skjodt Assembly Hall since 2008.  That’s when Dan Dakich briefly followed Kelvin Sampson’s moronic malfeasance with accountability and consequences.

Still, even with Woodson coming home, three games is a little early to pull the plug on the excitement for a season that had IU ranked 17th before being throttled by Iowa in the opener.  That excitement just never felt reasonable.  IU fans kept trying to talk themselves into believing this season might be different.

The hope for Indiana Football was fleetingly tied to an uptick in recruiting and the “Love Each Other” credo proffered by hyper-enthusiastic coach Tom Allen.  Hard core boosters dipped their toes in the water of buying in, but have since resumed skepticism.

I spoke with one of these guys at a party last Saturday after Cincinnati turned a 14-point deficit at IU into a 14-point win.  We briefly discussed Indiana Football – and I am certain this conversation was repeated tens of thousands of times Saturday afternoon  Here is the transcript of our conversation that features a moment of enlightenment for the booster/Indianapolis physician:

Our talk immediately turned to Jackson-Davis, Tamar Bates, and Race Thompson.  “Do you think Woody can get IU to defend and make free throws?  It’s been a long time since Indiana looked like Indiana!”

The sparkle returned – for now.

2 thoughts on “Summer turns to fall and energy for Indiana Athletics turns again from football to basketball!”