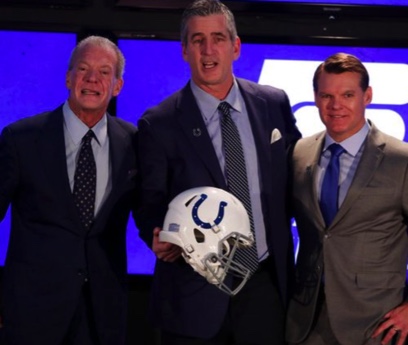 These three leaders were never going to be happier together than on the day Frank Reich was hired.

The NFL season is three games old, and Indianapolis Colts fans don’t know what to do with their anger over the winless start.

Just like disgruntled customers at a restaurant, Colts fan want to talk to the manager.  The only question is whether that manager for the Colts is coach Frank Reich or general manager Chris Ballard.  One is paid to teach and scheme, and the other hires the employees that are not delivering a satisfactory result.

Coaches are judged by their losses and NFL GMs are vetted by the quality of their drafts.  Both can see their careers derailed by the failure to meet high expectations which are built through a lens distorted by recency bias.  Win some, and more wins are expected.  Get to the playoffs, and a Super Bowl needs to be next.

Reich led a Colts roster built by Ballard to the playoffs last year.  After coming within three points of upsetting the Bills on the road in the wild card round, this year fans assumed they would take a step in the right direction.  Owner Jim Irsay keeps mentioning the goal of this franchise is to win multiple championships, which has to make Reich and Ballard wince.  Fans bought in.

At 0-3, fans are now selling out, and Reich and Ballard are the people they are demanding pay the price.  Never mind that Reich led the Colts to the playoffs two out of the three full seasons and is now coaching a fourth starting quarterback in as many years.  Never mind that Ballard built the rosters that earned spots in the playoffs.  Anger demands a victim, and Reich and Ballard are as good as any.

When a play works, the players did it.  Fans say things like, “What a throw by Wentz!”  “Did you see Pittman grab that ball out of nowhere?”  “Buckner made the center and guard look silly!”  When a play fails, it’s always, “What the hell was Reich thinking?”  Forget that a block was missed or a run would have been idiotic against an eight-man front.  Reich should never have called what he did!

The only acceptable eventual answer for fans is a championship.  Once a coach gets a ring, he buys himself up to a year of grace before he fails to repeat which incurs the wrath of those for whom one championship is not enough.  That means everyone.

With a general manager, it’s similar.  Ballard drafted Jonathan Taylor, Darius Leonard, and Braden Smith in the second round.  Those guys aren’t just starters, but game-changing forces.  Fans give glancing credit to Ballard for those successes.  They say, “Who wouldn’t have taken those guys?  It was obvious they would succeed!”

Fans look at Ben Banogu, Quincy Wilson, and Parris Campbell, and say, “What kind of idiot is Ballard?  Those guys suck!”  Of course, Wilson’s sucking is past tense, and Banogu and Campbell may stop sucking soon, but it’s the misses that define a general manager.

In the backs of our minds, we understand that Reich didn’t suddenly get dumb and Ballard is hitting on picks more often than missing, but we still require someone to point at when the Colts fall short of expectations.  It happened to Chuck Pagano and Ryan Grigson too.  Hell, even Bill Polian was run out of town after the disastrous 2011 season as Peyton Manning recovered from a spate of neck surgeries.  Indy is not alone in demanding a head on a platter for falling short of perfection.  Bill Belichick was fired in Cleveland.  The Bulls allowed Phil Jackson to leave the Bulls after a second threepeat.  That had nothing to do with Bulls fans, but it was still ridiculous.

That’s the way professional sports work.  Win, it’s the players.  Lose, it’s the coaches and/or GM.  And when the losses get so thick a sacrifice is demanded, the coach and GM start to position themselves against each other because their survival instinct kicks in.  That’s stage three of systemic failure.  Colts aren’t there yet, and that’s a good thing.

Hopefully, the Colts work this out before an entry to stage three requires an intervention with Irsay – like the Pagano vs. Grigson standoff of 2016 that ended in that bizarre late night press conference with Smiling Chuck, Scowling Ryan, and oddly proud Jim.

The Colts must get a win this Sunday, or the downward spiral of fan anger and their demand for accountability will accelerate toward an abyss from which someone is not going to be able to climb.