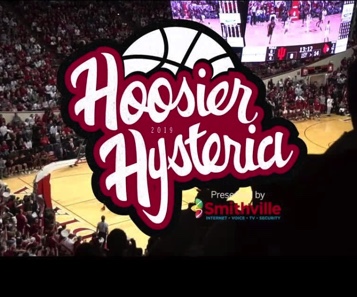 I don’t mind that Hoosier Hysteria is presented by Smithville, but it pisses me off it will be presented on BTN+ for $10!

Greed sucks, but it’s impossible to avoid.  Even in the chaste world of college sports, the bottom line is the only line.

Big 10 coaches and administrators “earn” hundreds of thousands of dollars – if not millions – because alums and fans covet watching students of their favorite schools compete for football and basketball glory.

I’ll buy tickets, sit through commercial breaks, and pay for the programming package that includes the Big Ten Network.  I do it happily because I want to watch Indiana Basketball and Football, and audit Purdue Basketball because I like the way Matt Painter has built his program.

Every now and again, I see on the guide that the Hoosiers are playing volleyball or women’s basketball, and I will watch a little bit.  Maybe BTN is airing an IU game from 1993, and I revel in the scoring ability of Calbert Cheaney.

I consider the money spent for BTN to be well-invested despite knowing the cash is used to make otherwise unemployable yet arrogant coaches obscenely wealthy .

Where I draw the line is at the $9.95 per month charge for BTN+, which is normally little more than a portal for events unworthy of being shared on the primary network or its three sub-channels.  It’s for parents of field hockey athletes and swimmers.  There is nothing wrong with that.  Parents will find the investment well worth it.

A couple of times each year, the Big Ten gets clever and greedy, and they stuff events people actually want to watch behind the pay wall.  One of those events is coming tomorrow afternoon.  Hoosier Hysteria will feature the unveiling of Indiana Basketball under Mike Woodson, and BTN+ will stream the event for those who subscribe.  In November, there will likely be a basketball game on BTN+ too.

You might be thinking that BTN will be so busy with football tomorrow, they have to bounce Hoosier Hysteria behind the paywall, “It’s not greed,” you say.  “It’s just that they have only four channels and sub-channels, and they can’t squish five shows into four slots.”  Not so fast.  Ohio State beating the hell out of Rutgers is the only football game with a 3:30p kick, and Hoosier Hysteria starts at 4p

Tomorrow, I will tell the Big Ten to stick my $9.95 up their spreadsheet.  When IU takes on Marshall, Jackson State, Northern Illinois, or one of the other non-conference cupcakes and the only way to watch is BTN+, I’ll pay my subscription, then cancel it immediately so it won’t auto-renew.  I’ll curse Big Ten commissioner Kevin Warren, and my wife will ask what I’m muttering about.

And somewhere inside a conference room at the Big Ten offices near O’Hare Airport in suburban Chicago, someone will get a performance bonus tied to BTN+ subscriptions.  Big Ten schools will applaud Warren for filling their coffers.

And fans will feel used.