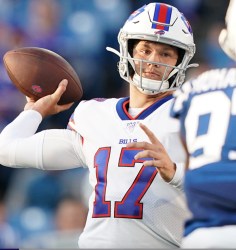 Corral Josh Allen and run the ball successfully. That’ll do!

We usually wait for the playoffs to uncork a massive list of statistical points of interest for a Colts game.  This week feels like a playoff week though, so in we dig to the data – some trivial, some arcane, but all interesting.

This game can serve as the counter to the Colts overtime loss to Tennessee, if somehow the Colts can earn the win.  It seemed likely that a loss the the Titans closed the Colts playoff window for good, and with it the chance to go to the playoffs in consecutive seasons for the first time since 2014.

It still appears that way, but hopelessness isn’t much fun, especially in November, so we kicked in one small pane in the window to allow just a little light.  Until the Colts are mathematically eliminated, we can indulge ourselves a bit.

Sunday’s game in Buffalo is the game the Colts can use to legitimize playoff dreams.  Only 1/2 game out of the third wildcard spot, FiveThirtyEight.com gives the Colts a 46% chance of getting into the tournament.  That seems high to me, but why argue with beneficial math?

A win would launch the Colts into a better than even shot at getting to 10 wins – the number that appears necessary to qualify.  Here are a lucky 13 nuggets to make thinking and talking about this humungous game a little more fun: