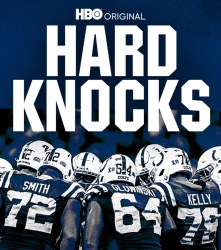 HBO’s Hard Knocks premieres tonight, and the Indianapolis Colts will regret allowing cameras behind the curtain of their operation.

This is the first time the Colts have been featured on Hard Knocks and also the first time HBO has profiled a team in the midst of the regular season.  All other behind the scenes looks at NFL franchises have come during training camp.

The Colts are looking forward to exposing their high character athletes to the world as they serve as goodwill ambassadors throughout central Indiana.  There will be visits to Riley’s Children’s Hospital and Peyton Manning‘s Children’s Hospital too.  We can assume that Colts will be shown serving Thanksgiving dinners to the homeless.  The Colts are rightly proud of their community outreach efforts and the willingness of their players to take part.

That is not why people watch Hard Knocks though.  Football fans want to see into the back rooms and operational crevices where they are normally not allowed.  That is the fascinating aspect of the show.  HBO is aware of that, so they will skulk around with cameras rolling in the hopes that they will catch someone in a moment of raw and dramatic honesty.

It’s happened before.  Here are three instances of the the kind of drama fans love and franchises hope never to have exposed:

There are two potential outcomes for teams participating in Hard Knocks.  The best is that no one watches.  That means no one humiliated themselves or their employer on camera.  The other is that a combination of idiocy and foolishness drives ratings and internal changes – meaning terminations.  The Colts do not care for drama, so I believe the most likely scenario is that everyone behaves roughly as we would expect.  Here is a look at the cast:

Interest in this season of Hard Knocks will be driven by the novelty of seeing the Colts prepare and compete during a regular season on the brink of playoff elimination.  We will look for hints of dissatisfaction among players, and a side of Reich that likely does not exist.  None will be forthcoming.

The longer the Colts are in the hunt, the better.  And if they become the seventh team in NFL history to make the postseason after starting a season 0-3, we will have some fun learning why and how it was done.

My money is on this season being totally empty of chaos and drama, but filled with plenty of feel good generosity and messages about Kicking the Stigma.

Here is a little preview. Enjoy.