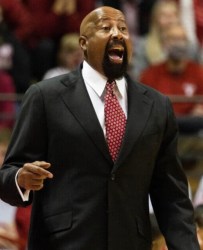 Mike Woodson may or may not be a Zen Master, but his Hoosiers won Wednesday, so allow me to dream, will you?

Indiana beat St. John’s Wednesday night in a game they would have found a way to lose during the previous four seasons.

The particulars aren’t nearly as interesting as the overall feel of the game.  Yes, Jordan Geronimo‘s seven points and five rebounds in eight minutes were crucial.  Yes, Khristian Lander‘s six minutes spelling the foul-ridden Xavier Johnson and ineffective Rob Phinisee helped set IU up for the win.  Yes, Tamar Bates was very competent for a freshmen playing against grown men for the first time.  Yes, Trayce Jackson-Davis is a double-double machine.

None of that is why Indiana fans are feeling good about this new version of Hoosier Basketball.  Sure, winning is fun – especially a late game, when sleep is sacrificed to watch adolescents throw a leather ball through a metal hoop.  For the first time in years, Indiana Basketball looked and felt like Indiana Basketball.  That won’t necessarily mean the Hoosiers are ready to win the Big 10 or NCAA Tournament, but it is going to make the next four months a lot more enjoyable.

People outside the Indiana Basketball sphere will have no idea what “Indiana looking like Indiana” means.  They just don’t get it.  This is mostly true among people in the media who get paid to dissect games rather than experience and appreciating them.  Some people work to break down basketball into objectively listed components.  Makes, misses, turnovers, fouls, blocks, rebounds, assists, etc…  But Indiana Basketball is about subjectivity.  Do players appear compatible and connected?  Is there a collective energy?  Does leadership hold players accountable?  Do players hold each other accountable?  Does this group understand its potential higher purpose?

Indiana Basketball is not about analytics or math.  It requires embracing the dream of harmony and effort in execution to create on-court perfection.  The suspension of selfishness is necessary to engage Indiana fans.

This bizarre and ethereal ideology confounds and frustrates most basketball fans and experts.  It seems haughty and self-indulgent to them as we attempt to elevate basketball to an allegory for the meaning of life.

For 40 minutes Wednesday night against a pretty good Big East team, Indiana defended and played together toward a common purpose.  That’s a big step in the right direction for a program that recently has had as many agendas as players and coaches, and has very seldom played tough defense as a unit during its five-year hiatus from the NCAA Tournament.

There are issues with the Hoosiers, like shooting (6-18 from beyond the arc and 10-19 from the line are not stats associated with winning teams) and turnovers (16 is too many by half), but the overall vibe of the operation is entirely different this season under Mike Woodson.  It’s as though they are trying to reach a plane of play that previous coaches didn’t understand exists.

Woodson appears to be treating his players like men, meaning he is requiring they behave like men.  He is not a coddler of fragile egos, but a leader who encourages freedom to excel while demanding consistent and selfless effort.  That’s what good coaches do.

I may be reading far too much into the play of 11 Hoosiers led by a new coach with ties to an old coach on a chilly November Wednesday.  This team might just be better at throwing the ball through a hoop and keep their opponent from doing the same.  Maybe basketball IS math, and I’m just some goofy buffoon who believes he sees beauty in basketball because he believes he saw it once a long time ago.

Whatever the case, I had a great time watching Indiana beat St. John’s in the kind of game they would have lost during any of the last five seasons.  And I’m hoping for more.