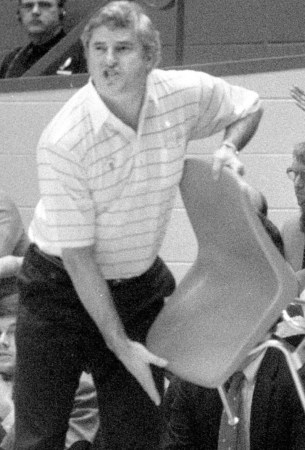 Even I am using the above pic of Knight throwing the chair instead of Juwan Howard slapping Wisconsin assistant Joe Krabbenhoft. Who wants to look at that?

Bob Knight has long been our society’s whipping boy for coaches run amok.  For 29 years as Indiana’s coach, Knight was less than restrained in dealing with his players, referees, bosses, media, and peers.

Tomorrow, ESPN and all other media will celebrate the 37th anniversary of Knight’s most entertainingly unhinged moment by replaying video of his infamous chair toss in 1985.  Knight was outraged by the officiating in a game against Purdue, picked up a chair, and tossed it across the court in front of Boilermaker guard Steve Reid who stood at the free throw line.

I wonder if 37 years from now, ESPN will replay the far more serious and troubling incident of Howard slapping the Wisconsin assistant.

It’s always open season for making fun of Knight.  Laughing at his expense and reducing his career to that episode is fair game.  He was the best basketball coach of his era, but also unendingly theatrical, extremely charismatic, and a very safe target.

Howard’s Michigan team is on the bubble for the NCAA Tournament this year after a first season of success.  He is not entertaining, bewitching, or a safe target.  He was issued a five-game suspension for the slap by the Big 10 and his university, but the media has been mostly restrained and accommodating to Howard.

It’s very likely that on next February 20th, there is no mention of the afternoon Howard physically struck an opposing coach.  But you can bet that next February 23rd, it will be time for everyone in sports media to re-rack Knight’s chair toss as a reminder of a coach gone bananas.

That speaks to Knight’s continued societal imprint as an ill-tempered whipping boy and Howard’s relative anonymity, as well as his standing as a current coach at an important university in America’s most powerful conference.