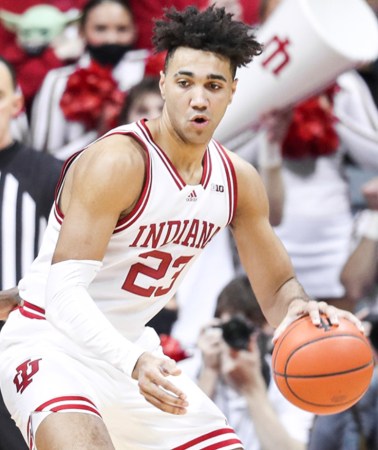 Trayce Jackson-Davis has a chance to help Xavier Johnson become a better basketball player through honesty, not saccharine platitudes.

Indiana is down to what might be its last bullet to salvage a season that began with a lot of hope, and Indiana All-American Trayce Jackson-Davis wants to help a forlorn teammate feel better in exactly the wrong way.

If the Hoosiers can end their five-game losing streak tomorrow night against Maryland at Simon-Skjodt Assembly Hall, they have a shot to earn their first invitation to the NCAA Tournament since 2016.  If not, the light at the end of the tunnel becomes an oncoming train.

Media had a chance to speak with Jackson-Davis today in advance of that game, and he was asked about point guard Xavier Johnson’s state of mind.  It’s a relevant topic because during the five-game losing streak, Johnson has made only 14-of-54 shots and committed 19 turnovers.

“X is down on himself. A lot of guys on our team are. I’m going to try to pick them up because I’ve been through this before,” Jackson-Davis said.  He added, “He’s going to be OK. … we just gotta stay in his head and keep telling him good thoughts. … I’m going to keep telling him to do things like shoot the ball.”

What?  Shoot the ball?

This reminds me a little of when I was a student at IU.  Sears sent me a credit card with a $260 limit, so being the financial stooge that I was, I went to the Sears at College Mall and spent $260 on camping supplies.  Knowing this, a friend told me, “You should stay away from credit cards.  You don’t understand them.  And you don’t camp!”  I thought he was crazy, and that paying Sears $10 per month for the rest of my life would be easy.

If Jackson-Davis had been the kind of friend to me that he is to Johnson, he would have told me, “You need to apply for more credit cards.  Get as many as you can carry, and buy yourself as much stuff you’ll never use as your apartment can hold!”  The only difference with Johnson is that his failures will happen in front of 17,000 impatient fans, on national TV, and the success or failure of his team are determined by those misses, as they have been over the last five games.

Thank God my financial struggles as an irresponsible college student were not televised and (mostly) ended with the Sears card debacle.

What Jackson-Davis should tell him is, “X – do not shoot under any circumstance!  And if you don’t believe me, I’ll bring in 15 teammates and six coaches who will tell you the exact same thing!  These aren’t games at the HPER where everyone is a chucker and no one can shoot it.  These games will determine whether we get IU back into the NCAA Tournament!”

That may seem harsh, but in a close game every possession matters and missing six shots for two makes is too extreme a penalty for IU to overcome.  Johnson’s ego cannot be a concern to Jackson-Davis, coach Mike Woodson, or anyone else associated with Indiana Basketball.

Real friends tell each other the truth no matter how painful, and good leaders make sure they understand it.

Indiana has wandered onto the tournament bubble in part because of Johnson’s missed shots and more than occasional turnovers.  Telling Johnson to not pass and not shoot is impractical, so we have to settle for him not shooting.

Basketball is a meritocracy, and being a shooter with a green light from coaches and teammates requires that some of them go in the basket – certainly more than 14 of his last 54.

If Indiana is going to turn things around, players and coaches need to start being honest with each other and focus on their actual strengths instead of niceties designed to lift spirits.

I am glad I had a friend who showed me an obvious hole in my understanding of credit and debt.  It made me smarter – and solvent.  That’s what happens in college – people learn what they are good at and should do a lot.  They also learn what to avoid.  Johnson needs friends and mentors to help him come to that realization, and sometime before tip tomorrow night would be a good time to do it.

[ed. note: I had my wife read this, and she said, “If Xavier Johnson doesn’t shoot, who will?”  My wife is smart.]