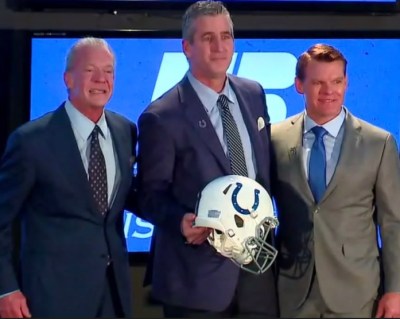 Why is Jim Irsay grinning widest? Because he is the only one of the three who won’t be first.

The instinct for survival will make a man do strange things.

Moral and intellectual bargains are made when a life, career, or job is threatened, and Colts coach Frank Reich found that out about himself today as he fired offensive coordinator Marcus Brady.

We see it all the time – bosses fire subordinates to net themselves another paycheck, preserve their severance, or maintain a position it took a lifetime to earn.

Reich’s comment in the press release announcing Brady’s ouster says it all, “This was an incredibly hard decision, but one I felt needed to be made in the best interest of the team. I appreciate Marcus’s commitment to the organization, and he made a significant contribution to our offensive success over the last five seasons. I wish him the best moving forward.”

Translated – “This was an easy call because it was him or me, and I’m not ready to say goodbye to this job or the cash I have left on my contract.  Marcus will be fine.  NFL people know he did nothing wrong, but was simply in the wrong position at the wrong time for the wrong franchise.”

Chuck Pagano pulled the same thing as he cycled through offensive coordinator Pep Hamilton to Rob Chudzinski.  He also changed out defensive coordinator Greg Manusky for Ted Monachino.  The survival instinct was strong in Pagano!  But as is always the case, shoving others onto the track does not stop termination train from rolling over everyone eventually.

Jim Mora stands as a class act who was fired himself for refusing to punt DC Vic Fangio.  He showed unusual spine in a coach for choosing to not save himself by firing his friend, whom he felt had done nothing to earn being replaced.  Evidently, that level of loyalty is quaint in today’s NFL.  Fangio, of course, was fired immediately after Mora.

When the Colts were riding high after 16 weeks of the 2021 season, it appeared they were right where they were supposed to be – on the precipice of something interesting and fun that could last through January.  Only one win in their final two games would secure a playoff spot.  The trade bringing Carson Wentz from the Eagles would be validated, and all was well.

Then the Colts lost to the Raiders and Jaguars, and Wentz was immediately cast as the villain.  He fit the mold – quirky, standoffish, put the team in peril because of the punitive protocols for those who refused the COVID-19 vaccine, and let’s not even mention left-handed shovel pass interceptions.

The offseason brought in a new veteran quarterback to save the day, and fans turned their thoughts to the possibility of Matt Ryan resurrecting his career for the Colts in the same way Philip Rivers had when he came over from the Chargers in 2020.

After coming back from the dead to tie the Texans in the 2022 season opener, Rodrigo Blankenship missed a potential game-winning 42-yard field goal, so clearly the tie was his doing, He was offered as a sacrifice to appease those unhappy with a less than glorious 0-0-1 start.

The offense continued to sputter through the next six games to a 3-3-1 record, and so 14-year-and-seven-game veteran Matt Ryan was next to be sacrificed, separated shoulder and all.  Sam Ehlinger would be the starting quarterback “right now for the rest of the season.”  Sounds kind of ominous – or at least vague, doesn’t it?

After a one-point loss to the Washington Commanders that featured two lost fumbles by the Colts inside field goal range that were not part of the gameplan, Reich moved up the food chain to fire Brady.

We know how this story ends – the firings continue until all responsible parties are eradicated.  That may or may not include general manager Chris Ballard.  Last time the Colts did this dance, the GM (Ryan Grigson) was fired one season prior to the coach.  It’s possible this time that owner Jim Irsay flips the script to allow Ballard to stay.

In the end, none will be saved nor remembered as gallant or decent – just men who decided their own hides were more important than anyone else’s.