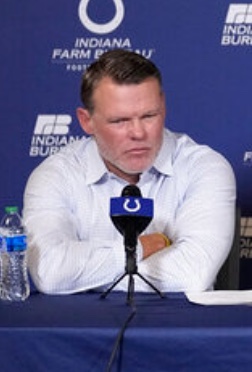 Colts general manager Chris Ballard is a hunted man, and his behavior during the Jim Irsay led media availability to introduce Jeff Saturday as the interim coach showed that.

There is no shortage of ideas for further examination after a very peculiar 35 minutes of insight Monday night from Irsay, Ballard, and Saturday, but I have chosen to look at the person who will be next in the line of kicker Rodrigo Blankenship, quarterback Matt Ryan, offensive coordinator Marcus Brady, and head coach Frank Reich as offerings thrown from the platform in front of a speeding train.  Ballard sat sternly on the stage, knowing Irsay’s hands would soon be on his back ready to thrust.

Irsay said about the prospect of firing Ballard, “Honestly, it’s not really even in the consciousness of my mind about that sort of thing. Look it, Chris was highly sought after when he came here. It was a great indication this organization – that he wanted to come here. He could’ve gone anywhere he wanted. He’s been executive of the year before. You guys can try to diminish him all you want, but that’s just your words. They have no substance to it because there is no truth in it.

“I mean, the guy is a winner and he’s been immensely successful. No one is perfect in this game. We all lose a lot in this league, Irsay continued.  “You know how many shots Michael Jordan has missed? You know how many games Michael Jordan has lost? I mean, in this league it’s tough and sometimes you don’t understand how fortunate you are when you’re around success because you think that’s the norm. But it’s not. And he fits right into that culture.”

Distilling that into a simple thought is difficult, but not impossible.  My translation is that Ballard needs to be ready for an exit interview on January 9th – the day after the regular season finale against the Houston Texans.  At that point, the Colts will either have executed a miraculous pivot to a winning record or cratered toward the selection of their next quarterback.

Either way, Ballard will be responsible for none of it and on his way out the door.  When he was asked why the team is underperforming, and replied in part, “We have not played as well up front as we need to play. I think you all know, as you’ve all been kicking the shit out of me for years for not drafting wideouts and all of a sudden I look up and we’re underperforming on the offensive line right now. That’s got to improve. That has to improve. Then, the turnovers during the year, just look at it. We’re turning the ball over.”

That response expresses the victimhood Ballard feels.  His anger at Irsay for arresting control of his franchise away from Ballard and his staff is projected against the media in a very odd way.  The receiver room has no depth, and has not been dynamic.  The media was correct in pointing that out.  Then Ballard admits the real problem is where he spent more money than anyone in the NFL – on the offensive line.  Guilty – and guilty again.

Maybe a lack of sleep caused Ballard to look and sound like a death row inmate grasping at straws, hoping his appeal will be successful.  Then in the next breath, he defiantly dared the firing squad to pull their triggers!

In the meantime, Ballard will try to be a good enough soldier to keep the cash guaranteed him in the contract extension his signed in the summer of 2021.

Monday night will be remembered as a bizarre event for a franchise that has had more than its share.  The stage was shared by the returning prodigal son, the outgoing general whose efforts fell short, and the benevolent autocrat who will rule as long as he sees fit.

Ballard’s chief sins were in not securing a workable longterm answer at quarterback, an intractable belief in building his roster from the inside out, and skin too thin to answer attacks without petulance.

Weep not for Ballard, as we will depart with a giant novelty check filled with many zeroes – at least that’s how I imagine the Colts do it.  The Colts will gallop forward with grand promises of brighter days and more Lombardi Trophies.