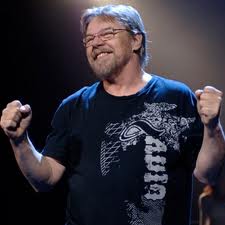 Last night, my wife and I brought our son Ryan to see Bob Seger and the Silver Bullet Band at the Scottrade Center in St. Louis.  We did it because he needs to see a man who truly enjoys his job.

There are very few times in life that we get to see a man do exactly what he was meant to do – and know it.  So many people roll through life avoiding their true talent because of money, expedience, or a perplexing aversion to success or happiness.

Bob Seger is a songwriter and performer.  When discussions of who should be on the Mount Rushmore of American music, or even rock music, Bob Seger is rarely mentioned.  As I watched the show last night, the quality of his songs was striking.  I always hated “Like a Rock” because it was on Chevy commercial four times an hour for a decade.  Listening to the entire thing live last night was a revelation.  It’s an amazingly frank recollection of youth by a man who is now confronted by the physical failures age brings with it.

At a time when every concert is a choreographed show, Seger bucks that evolution of live acts by simply playing his songs with an excellent band.  The star of the concert is the canon of Seger’s compositions.

His performance level, as always, is unique.  The pseudo-dancing is just like the songs – an expression of the joy Seger feels about life.

Life is filled with opportunities to compromise dreams, loves, and joys.  Few of us have the stones to live life doing exactly those things that ring true to us.  While parents try to make sure their kids get a great education through traditional means, going to a show like the one Ryan got a chance to see last night will benefit him for decades – as it did me.

As far as where he stands in the pantheon of American songwriters, listen to “Night Moves”, “Hollywood No-ights’, “Main Street”, “Turn the Page”, “Fire Down Below”, and the rest of his catalogue, and then judge for yourself.  I would list him with Dylan, Wilson, and Springsteen.

Whatever Seger is, people who see him live have no doubt who he is.  We should all strive to live a life as true as he has.

6 thoughts on “Bob Seger Is a Study in Happiness, Contentment, and Joy”