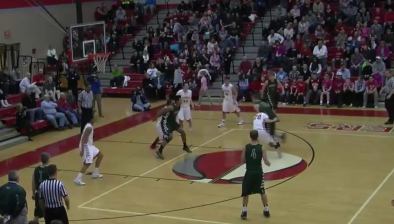 Each game is just another game, so they say. For Fishers High School basketball coach Joe Leonard and the Fishers basketball program, Friday night’s game against Zionsville (17-4 and winners of their last ten going into the game) for the Hoosier Crossroads Conference championship wasn’t just another game. The program, nine years in the making, was playing for its first conference title.

The Tigers had to scratch and claw (pun intended) to earn its first title. Though it was a close, hard-fought game throughout, Fishers pulled away in the late minutes thanks to a timely three by senior Keegan Kollmeyer and a couple of Zionsville technicals to secure the win, 68-55.

“We knew we had to come out and work,” Fishers coach Joe Leonard said after the game. “But there’s a little bit of a toughness with this group we earned in the off-season. So we’re very proud of them tonight.”

No one seemed to realize Fishers had finished runner-up in the tough HCC two out of the last three years. But no one remembers second. Only a conference title was going to give the program the respect it deserves. Coach Leonard won’t say it but I will: In regular season game terms, this was as close to a  must win as you’re going to get. And the Fishers Tigers delivered. From the coaching staff down, the Tigers delivered.

Fishers gutted out a hard-fought win against a well-coached and talented Zionsville Eagles team, led by seven-foot senior Derrik Smits (son of the Dunking Dutchman, Rik Smits) to seal the deal and bring the school it’s first conference basketball title.

That patience was rewarded as Fishers hit  11 three-pointers and out-shot the Eagles at the free throw line (19 of 23 to 12 of 17). On the other side of the coin, it was the Fishers defense that was able keep Smits in check with ten points.

Years of navigating through the waters of the HCC came to this. Playing second-fiddle to crosstown rival Hamilton Southeastern and past Mr. Basketballs Gary Harris and Zak Irvin were over. If you don’t think this game was a big deal, you weren’t in the gym Friday night. Hoosier Hysteria returned to its roots for a little bit and  local media eyes were on Fishers-Zionsville this night.

Yep, this was a big win. And the celebration after the game proved as much. Some felt pure joy. Some felt relief. Assistant coach Ray Tolbert even worked in a nice video-bomb of Coach Leonard’s interview on WRTV after the game (seen at the 2:15 mark of this video) –  a nice lighthearted punctuation to the evening.

I caught up with coach Leonard after the game to talk about the importance of this win and the process of building the program to reach this point – a nine year process that Leonard has been a part of every step of the way, including at the helm the last eight years.

“When I first got here, the first thing we had to build was a work ethic. We started getting players to come in at six in the morning and work. Then it became not only about having that work ethic but can you make plays, too. We went from a focus on kids with a great work ethic to having kids who had a great work ethic and could make plays. So we got that turned around and had five consecutive winning seasons. Then last year we dropped off a little bit. But we dropped off with sophomores. These guys came back as juniors and with the help of (senior Keegan) Kollmeyer and the leadership of the other two seniors, they’ve turned it into a pretty good program.”

On how Fishers finally won the conference having finished second two out of last three years:

“The one thing is we’ve never been able to get by Hamilton Southeastern with sometimes two Mr. Basketballs on the floor (Gary Harris and Zak Irvin) and at one point two Mr. Basketballs and an a future NFL first round draft pick (Randy Gregory of Nebraska). So there was just a wealth of talent over there. But now the tide might be turning a little bit as far as athletes coming our way.”

On the overall importance of this win:

“We put on the board before going out that this was our house and this was our conference. If you defend your house, you’re going to win the conference. The one thing we asked them was, ‘When are you going to get another opportunity like this the rest in your life?’ Will you get it again, maybe. But this is a moment you can’t let slip by, so we addressed the moment that they were in. We said bring your A-game, because it’s going to be a big deal and it’s going to be something this program needs. We’ve always looked at this as a process. This is a process, and you have to take the next step. We viewed this as the next step.”

On leading scorer senior Keegan Kollmeyer, who pumped in 28 points:

“I sure wish I had gotten my hands on him as a Freshman. He started out at HSE. He came over and showed immediate talent. But along with the rest of the kids, we had to improve his work ethic. But without him this year, would we have done this? No. He’s brought a lot of game to us. The thing is he’s done it in an unselfish way. There’s been some games he’s only had ten points, but he’s had seven rebounds. Like last night, he led us in rebounds. He’ll do what it takes. He’s also a great passer with great court vision. And a kid like Zach Eaton who doesn’t score much but he still had seven assists last night. Andre Small (a reserve guard) had five assists last night. It was a great all-around effort.”

Everyone chipped in for Fishers Friday night – Kollmeyer, Eaton, Lance Dollison with 21 points, Cam Wolter with 14 points and clutch free throws – a reflection of the team work ethic and all-around effort Leonard talked about and envisioned. Working to stamp its own footprint into the landscape of Hamilton County basketball, everyone involved with the Fishers program had reason to feel darn good about this one. It was a long time coming. Fishers has a basketball championship to boast about now. And nothing gives a program, coach and players, respect like a championship.