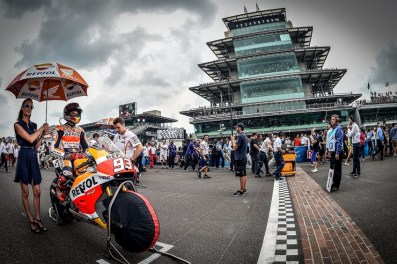 Attendance was up for this year’s Red Bull Indianapolis Grand Prix. 67,648 was reported by commercial rights holder Dorna Sports. The buzz on the grounds was strong. Last year’s event was voted best on the MotoGP calendar. Teams love being here. Manufacturers love being here. Fans love being here. Riders like being here more now that the track was re-paved and re-configured prior to last year’s race.

Marc Marquez loves being here. The Repsol Honda rider continued his Indy dominance passing Movistar Yamaha’s Jorge Lorenzo with a few laps to go to secure his third straight Red Bull Indianapolis GP victory and fifth race win overall at the Brickyard. A great, entertaining battle at the front ended with one of the sports very special talents on top.

It was a race that had international MotoGP commentator, Nick Harris, saying, “This is some of the best racing we’ve seen in a long time.”

And the addition of American-based MotoAmerica to the schedule of events certainly added more of a U.S. flavor this year, including two local participants for fans to root for in Matt Carr of Fishers and Gene Burcham of Plainfield. It all meant more racing – five races in all Sunday with Moto3, Moto2, MotoGP and MotoAmerica’s classes.

But once again, a topic that was present the entire weekend was whether or not MotoGP would be back at IMS in 2016. A great weekend of on-track activity and increased attendance and buzz was being mellowed to a degree by the rumors of this year’s event being the last. It certainly frustrated some journalists and fans I spoke with, who love the sport and love the event and are tired of dealing with the topic every year.

So what’s the problem?

This is modern day sports, folks, where a MotoGP event in the motorcycle haven of Qatar can be deemed a success with only 15,000 fans in attendance. So who knows, maybe Dorna wants to expand into new markets in 2016 without expanding it’s number of events (or go for a bigger pay check, to put it another way). And they have another U.S. event on the calendar at the Circuit of the Americas in Austin, Texas, so maybe they deem one expendable.

I know this, there may be larger attended events on the MotoGP calendar in more MotoGP-centric parts of the world. But when you have an event that’s voted the best on the calendar, at the premier racing facility in the world in the middle of the largest economy that is the United States, it doesn’t make much sense to me for the event not to continue.

Maybe the lack of a U.S presence in MotoGP has folks at 16th and Georgetown concerned about its future marketability. But with only one U.S. rider this year (“The Kentucky Kid” Nicky Hayden), attendance increased. Maybe the net financial return is no longer large enough to justify the investment of resources. I just don’t know.

What I do know is there was a huge international fan presence in the paddock this weekend. While waiting to speak with some riders post-race, I talked to a group of guys who traveled 18 total hours from Greece. I talked to a gentleman from Venezuela, sporting a Valentino Rossi hat, who was drilling me with questions about the Indy 500. I talked to a couple from England who begged for a photo with Great Britain’s Bradley Smith…”Please, Bradley. We traveled all the way from England.” Smith obliged, then said “cheers” and rode off.  There were countless others and they all love coming to Indianapolis to see MotoGP and their stars.

At the end of the day Sunday, one of the team managers said to me, “Good seeing you again, my friend. I hope to see you next year.” I certainly hope so. I love the event and the people.

Every year the rumors swirl and every year the race finds itself back on the calendar. Let’s hope that after a year where things seem to be trending upwards, that’s the case for 2016. You can re-order tickets right now on ims.com. I hope that’s a good sign.

The Red Bull Indianpolis GP in pictures:  See a complete visual gallery of the RBIGP weekend. Hats of to the artistic abilities of the IMS photographers, who do an outstanding job at every racing event.