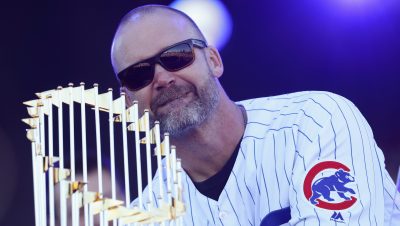 Job one for David Ross will be to clean up the on field slop that doomed the 2019 Cubs, and that might not be pretty.

David Ross will be named the 61st manager of the Chicago Cubs on Thursday, according to Jesse Rogers of ESPN.

He was the frontrunner for the job even before Joe Maddon was fired.  Ross is seen as a disciplinarian with deep beliefs as to how baseball should be played.  Suffice it to say, Ross’s way was not adhered to during a very sloppy 2019 season that ended with the final day of the regular season and not the playoffs for the first time since 2014.

Ross remains one of the most popular figures from the 2016 champs, and that is good for business as the Cubs launch the Marquee Network as the sole TV provider of Cubs baseball.  While his tether to the 2016 team is mostly meaningless in terms of how successful the team will perform in 2020, that tie will make this hire more popular with a fanbase that the business side of the operations wants to write checks.

If the Cubs had hired runner-up Joe Espada, fans in Chicago wouldn’t have been able to pick him out of a lineup of major league bench coaches.  It wouldn’t have sold a single season ticket.  Espada might wind up being the next Maddon wherever he winds up, or he could be the next Mike Quade.

None of that branding/business crap means a damn thing toward the Cubs rebounding after three years of steadily declining October fortunes.  Maybe Ross will be the perfect candidate, and maybe he won’t.  Better to bet on the sure thing from a business perspective.

The closest equation to the Ross hire I can recall is the St. Louis Cardinals hiring Mike Matheny after the retirement of Tony LaRussa.  Matheny was a winner with the Cards – who went to the playoffs four out of his five years as a catcher.  Matheny was 41 without any managerial experience at any level when he was hired.  Ross is 42, a winner, and has never managed.  Both suffered severe concussions and were defensive stalwarts as players.

The Cubs hope the similarities don’t end there.  Matheny led the Cardinals to the postseason during his first four seasons in St. Louis, including a World Series run in 2013.  The Cubs would take that in a heartbeat.

Some fans and media hoped the Cubs would reach outside the family for a fresh voice like Espada, but that doesn’t make a hell of a lot of sense.  This five-year run is the franchise’s most successful since 1906-1910.  Embracing the success achieved rather than running from recent struggles Ross had zero to do with makes a little more sense.

Ross joins an interesting list of former Cubs players who have managed the team following the end of their playing careers – Johnny Evers, Charlie Grimm, Jim Marshall, Joey Amalfitano, and Lee Elia among them.