It had to happen eventually.  How long could IU fans expect the frenetic and constantly-hydrating Tom Crean to 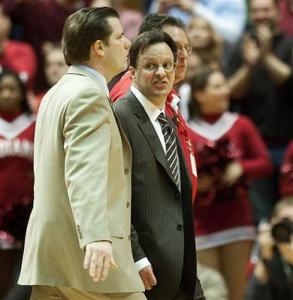 take that kind of abuse?  It’s been a long time between W’s for Crean and the Hoosiers, and fan were beginning to question Crean emotional health with loss after loss greeted by incessant clapping and bizarrely incongruous encouragement.

Crean had no choice but to support his guys.  They aren’t playing with anything resembling precision and seem overmatched in most games, but they are still showing up and hopefully they are taking steps to improve.  This lost and dreadful season is more about taking positive steps for next year than the results we have to swallow now.  Crean needs to demand improvement, but if the kids aren’t capable because they are too young and inexperienced, it does no good to publicly excoriate them.

At the same time, fans (and the team) need to know Crean is committed enough to display more than cheerleading prowess.  Last night, Crean finally blew to let the team and fans know that he has some fight in him and he is willing to lose his shit to show it.

I’m almost never a fan of emotional outbursts because an emotional mind no longer processes information and only reacts to what happened in the past.  That doesn’t do anyone any good.  There are rare people, like Bob Knight, who could do both.  Angry outbursts came so easily to Knight that he could scream at Tom Rucker while simultaneously formulating strategy, or at least he made IU fans believe that’s what he was doing.

The fans that were left in Assembly Hall were treated to a reward for remaining as the game was long over at the point of the ejection.  It was a late game, so many of the kids had gotten a head start toward Kirkwood for a 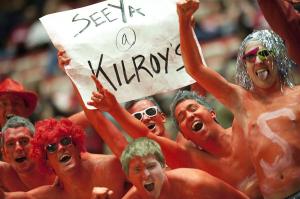 Thursday night of binge drinking and mayhem.  Thursdays were always the best nights of the week socially.  Everyone was ready to rock on Thursdays, so it’s not surprising that the kids bailed prior to the game’s end at 11p.

Crean earned some love last night for his well-timed tirade, and gave fans a glimpse into his passion for the program, as that was what the outburst was designed to do.  He said during his postgame press conference that he will never apologize for his passion.  No one should,  He also shouldn’t apologize for the display of passion to be a little bit too well-timed to have not been contrived to convey they passion to the fans and his players.

With Bob Knight (will the comparisons to of the current IU coach and Knight ever stop), fans were never sure if he was crazy and out-of-control or a genius for his behaviors.  What they were sure about was that Knight was great at getting five minutes of righteous whistles when he went off – unless Ted Valentine was on the floor to make sure Knight knew who he thought was running the game).

Knight held everyone around him responsible for a level of conduct, and his hysterics seemed to make that clear.  Not sure what Crean what edict Crean was trying to enforce last night other than steering the postgame conversation away from the losing streak, but what the hell, it brought some drama to a game that held none on the floor from the opening tip.