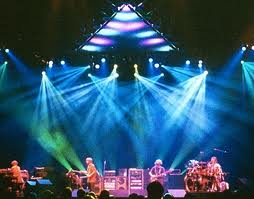 What was up my ass during Thursday’s Phish show is anyone’s guess.  I enjoyed the music, but the pervasive drug use was troubling to me.  It made me sad to see so many good people go to such lengths to distance themselves from reality.  If that makes me a puritan, that’s fine.  I couldn’t get past it to enjoy the experience, and that’s my issue.

As oddly bitter about the first night as I was, I enjoyed the experience that much last night.  The people at the show and in the campground were amazingly generous and good-spirited.  Despite living only six miles from Deer Creek – no one there called the place Verizon Wireless, which I loved – the campground felt like it was a thousand miles away, and we had gone on vacation with a bunch of strangers, who weren’t strangers for long.

There is nothing better than a great surprise, and after the first night, my expectations for Friday were pretty damn low.  That I had an excellent time was a real surprise.

I wrote a post yesterday about the experience of watching the show and audience from the perspective of a parent, and clearly people didn’t much care for that.  Writing things that are popular isn’t my aim, which is good because the comments were skewed wildly toward the negative, but people made some salient points in their comments – the best of which was that being around 50,000 drunks at an NFL game is far worse than sharing a night of great music with 20,000 people, many of them stoned.

The many fistfights I’ve seen at or near sporting events have been much more disturbing than anything at the Phish shows.  There is a camaraderie in the campground that made it seem silly to pack anything away when we left to go to the show.  That anyone would be so callous as to steal was inconceivable.  There was a real sense of community there that would be wonderful within the construct of a neighborhood.

I spent some time talking to a couple of good guys yesterday trying to figure out what I missed on Thursday.  Ryan and Josh were generous enough to enlighten me.  Their group was so kind to my wife and I that it was incredible.  They gave us shade and good conversation, making the experience exceptional for us.

Drugs are still idiotic to me – an escape from reality that I think represents an unfortunate choice or series of choices, but the people at the show – stoned or not – were filled with enthusiasm and a sense of adventure and trust that are anything but bad to be around.

Those who were tolerant enough of a tight-ass to welcome him taught me something about tolerance.  By the way, Phish made both Ryan and Josh’s night by playing “Wilson”.  Now I know why.