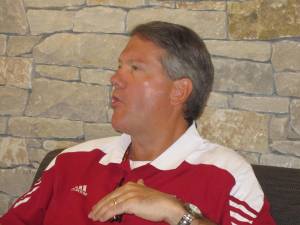 It occurred to me yesterday as the Crossroads Classic was announced how lucky the State of Indiana is to have four exceptional athletic directors taking the initiative in doing the right thing in putting together such an event.

Today, at Indiana University for the football program’s media day, it was very clear that Athletic Director Fred Glass is not just a very competent administrator, but a kid in a candy store who grew up to own it.  Glass is as genuinely excited about seemingly silly game day contrivances as he is with the serious issues surrounding the team.

That is to his great credit.  There are way too many administrators who treat athletics as something that has no window for fun and creativity.  Based on the enthusiasm Glass displays as he talks about the latest fun bit of business he is implementing in the student section, you would think he might be a distant cousin of Bill Veeck.  No idea is a bad idea for Glass, and that’s a great attitude to have if you want to win big.  He is not exactly risk averse.  I’ve never seen what he describes below, but it will be a huge hit with the team and the students.

The worst part of those who go to IU football games is traffic.  Coming in from Indianapolis or any point north on the Ruel W. Steele Memorial Highway to state Road 46 or the College Avenue exit is a nightmare, and there is no legitimate alternative.  Below, Glass explains what he’s doing to try to facilitate a smoother ride into the lot.

Regardless of the bells, whistles, and horns in the stadium or whether Glass can provide a magic carpet for each and every IU football fan to ease traffic congestion, Glass knows that there is nothing like a winning team to bring fans into the stadium, but he wouldn’t specifically articulate exactly what his expectations are for the program either as a team or draw for increased attendance.

IU football will have to prove its quality on the field, but given the rash of structural improvements and Glass’s desire to change the dynamic of the gameday experience and ticket structure for fans, there are expectations the team will need to meet for Glass to continue down the current road.  He knows that a part of the process of growth is the periodic stripping and rebuilding of any program, system, or event.

Being the best AD in a decade at Indiana isn’t like Chuck Yeager breaking the sound barrier, but Glass is not just the best in a long while, he is the right guy at the time to lead IU out of the second division muck where they are ensconced.