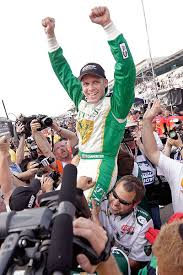 Predicting the pole winner going into Saturday as qualifications took place for the 2013 Indy 500 was as unpredictable as the weather. But the weather delay didn’t dampen the excitement, nor the enthusiasm from the crowd as Indianapolis’ own Ed Carpenter won the honor to pace the field of 33 for the 97th running of the Indy 500.

Will Power was the last driver to attempt to knock Carpenter off the pole position he had just earned moments earlier during the Fast Nine shootout. As it became clear Power wasn’t going to succeed, the crowd roared up and down the front stretch. Moments later, I received a text message from my son that read: Ed gets standing O from Turn 1.

It was a cool hometown party indeed for the longtime Indianapolis resident and Butler graduate. The small, single car team owned by the same guy who drives the car beat Goliath – a bunch of them: three Team Penske cars and five Andretti Autosport cars.

There’s so much parity in the IZOD IndyCar Series right now.  Going into qualifying weekend, any number of drivers had a chance to earn a spot on the prestigious front row. But it was Carpenter, the only team owner/driver in the series, winning one for the little guys.

“I knew we had a shot at it, but the field is so tight and Chevy brought such a great engine,” said Capenter. “I wouldn’t have been surprised if we were outside the top 10, too. It’s an honor to win this pole because it is a really competitive field. This is awesome, and it’s bigger than our wins and it’s huge for the team, huge for Fuzzy’s Vodka. It’s definitely a landmark day, but I don’t want to get overly focused on this because we have a lot of work to do yet.”

Understand, these drivers were asked to do again what they barely enjoy doing once: trim a car out as much as possible and hold on for four laps of qualifying at Indy.  For many of the drivers, the intensity of the moment was enough for one day.

“We took everything off and went for it, definitely starting the last lap I really did not want to do it,” said Power, who will start sixth. “It was so bloody…yeah. Even the last two corners, you’re like, ‘Man, I don’t know whether this thing is going to stick.”

Based on early season results, as well as practice speeds this week, you couldn’t have gone wrong if you had chosen anyone from Andretti Autosport for the pole.  The stable of five drivers  – defending series champion Ryan Hunter-Reay, James Hinchcliffe, Marco Andretti, E.J. Viso and rookie Carlos Munoz – have continued the team’s regular season success at Indy.  On Saturday, all made the Fast Nine with Munoz and Andretti joining Carpenter on the front row.

That’s a far cry from just two years ago when only two of the team’s four drivers qualified, leading team owner Michael Andretti  to broker a deal to buy Hunter-Reay a seat for the race.

And you couldn’t have gone wrong if you had chosen anyone from Team Penske. Helio Castroneves, Will Power and A.J. Allmendinger were also dominant all week.

It was a Chevy Fast Nine sweep. The highest starting Honda will be Alex Tagliani, 11th

So what do the qualifying results mean for the race? Who knows. Chevy dominated practice and qualifying last year, too, until all the Honda teams got their new race engines for Carb Day.

“To tell you the truth, what we saw last year from (Target Chip) Ganassi and Honda, you had no idea that was going to happen on race day,” said Hunter-Reay earlier this week. “I think qualifying will be one show, then the race. You have no idea what anybody has until you get there.”

From what we’ve seen the last couple of years at Indy and in the series overall, we should be in for another great spectacle.

If I had to pick, I’d go with Marco Andretti. The team is so strong right now and Andretti is always good at Indy. He had the car to beat last year before troubles did him in during the latter part of the race. He’ll be strong again, for sure.

But as I was walking to my car late Saturday after leaving the media center at the Speedway, I couldn’t stop staring at a massively tall Ed Carpenter Fuzzy’s Vodka banner hanging down the back of the Tower Terrace suites. Carpenter is just smiling right at you as if to say, “Hope you enjoyed the party.” Come to think of it, there’s Fuzzy’s Vodka signage everywhere – inside and outside the track. I never thought much about it until Saturday evening.

Maybe this will ultimately be Carpenter’s party after all.