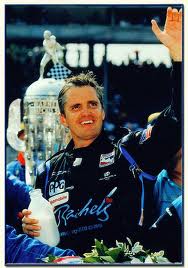 When you watch the television broadcast (or re-broadcast) of this year’s Indianapolis 500 on ABC, you’re sure to be entertained and educated by the knowledge and experience of 1998 Indianapolis 500 winner Eddie Cheever.

Cheever is fairly direct and passionate about everything he has to say about open wheel racing. When you engage him in conversation, you’re best to listen, especially if you’re fortunate enough to ask him the right questions to get him to pontificate and not look at you like you’re a moron for asking a stupid question.

As exciting as the IZOD IndyCar Series has been this year, there’s no shortage of storylines the 1998 “500” winner has an opinion on concerning this year’s race.

“We might be witnessing history. For only the fourth time in the history of the ‘500,’ we might have a four-time winner, either with Helio Castroneves or Dario Franchitti. That’s a big thing. We have a whole new generation of younger American drivers who are doing very, very well. One of them is on pole (Ed Carpenter).

“It’s the second year of this new equipment. Everybody is getting a better handle on it. And the field is incredibly competitive. Anybody out of that (Fast Nine) could have gotten the pole. So you can just pick and choose whatever you want. It’s going to be a great race. I suspect more passing than there was last year. I suspect there might be a few more accidents because the drivers are more confident than they were last year, so they’re willing to risk more. It’ll be full of surprises”

On Andretti Autosport’s armada of drivers starting in the first three rows, particularly rookie Carlos Munoz, who starts in the middle of the front row Sunday:

“I would say the biggest surprise – and it’s a pleasant surprise – is to see how well Andretti Autosport has done. And (Carlos Munoz) is one of the surprises that have come out of that group. But every one of them (Ryan Hunter-Reay, James Hinchcliffe, Marco Andretti, E.J. Viso and Munoz) has been quick. Every one of them has been in the top group every day. He had a stunning performance in qualifying. He’s not afraid. That comes a lot with youth. When you have a good car, you just go out and do it. But I can tell you one thing I am positive of is that there are two types of drivers in INDYCAR: There are those who have hit the wall and those who are going to hit the wall. It’s just a question of how and when. So if you get too aggressive with it, and you think that you’re bulletproof, the racing gods have a very quick method of showing you that everybody sooner or later spins.”

INDYCAR fans (and some INDYCAR media) have an inferiority complex. They spend way too much time whining about what’s wrong with the series instead of being ambassadors and embracing what is, hands down, the best racing out there.

Cheever has an answer for that, too:

“I think everybody needs to stop making a comparison to NASCAR. Let NASCAR be what it is, and let INDYCAR be what it is. It has a lot of talent. It’s got a lot of great racing. They do a lot of different tracks, and that’s great. I think the racing is exceptional. They have some incredibly talented race car drivers here, race car drivers from all over the world. America is very well represented in that group. And we have a great battle between Honda and Chevy.”

So stop whining INDYCAR fans and take Cheever’s advice. Stop for a minute and smell the roses. Sure, every rose has its thorn – as Brett Michaels of Poison will surely sing to you Friday at Miller Lite Carb Day. I prefer the carp diem perspective when if comes to modern day INDYCAR.