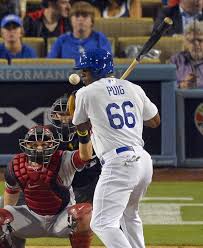 Yasiel Puig takes an Ian Kennedy fastball in the nose. Kennedy should be done for the year, but received only a 10 game suspension.

Everything on a baseball field should be dealt with by ballplayers, managers, and coaches – except for one thing so egregious and dangerous that it should command a deterrent that keeps it from being an option.

Throwing at a batter’s head is a pitiful move by a pitcher who should be forced to spend a serious amount of time away from the game for that decision.  A pitcher who is so ill-tempered he would put another player’s career in jeopardy should be required to ponder that commitment in solitude for a significant period of time.

Men have died as the result of a fastball to the head, and many more have seen their careers derailed or ended.  Don Zimmer spent 13 days unconscious because of a beaning.  Dickie Thon and Tony Conigliaro suffered eyesight damage that kept from a long way from reaching their potential.

The 10-game rip given to Ian Kennedy amounts to two starts for hitting Dodgers rookie sensation Yasiel Puig in the nose and Pitcher Zach Greinke in the back – only because Greinke turned just in time.

Pitchers who willfully throw at the head of a hitter have no place in baseball at all, and a pitcher who can’t control the ball well enough to throw inside without threatening the face of a hitter is a menace.  There is no difference between the two.  One is a sociopath and the other is incompetent.  Neither should play baseball for a living.

Dodgers infielder Eric Hinske was suspended for five games, and the other suspensions of either one or two games were assigned to Skip Schumaker, Mark McGwire, Don Mattingly, J.B. Howell, Ronald Belisario, and Kirk Gibson.

None did any more but rush the field and shove each other around.  Maybe a punch was thrown, but where’s the harm there?  I don’t mind a fight once in a while.  Baseball is a little like the five families in New York’s mafia of the 1940s and 1950s depicted in “The Godfather.”

Clemenza tells Michael Corleone in the movie that the families need a war every 10 years or so, “These things gotta happen every five years or so, ten years. Helps to get rid of the bad blood. Been ten years since the last one.”

Baseball needs to have frustration turn into a fistfight every now and then, or worse things happen.  Since when did ballplayers need to be gentlemen anyway.  It’s a man’s game played by men, and if a right cross is needed to allow the pressure to dissipate, so be it.

What baseball cannot tolerate is a fastball to the head.  Kennedy should be done for the season for throwing at Greinke’s head.  The Puig thing looked like it could have been an errant pitch to discourage Puig from diving in with too much enthusiasm.  No excuse for the pitch at Greinke.

The other suspensions are just muscle flexing and posturing.  Kennedy’s presence on the mound cheapens baseball.