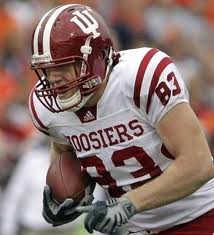 Of all the Hoosiers who spoke to the media after last Saturday’s 41-35 loss to Navy, none seemed more disconsolate than tight end Ted Bolser.  Not terribly concerned with his own personal achievements, it seems, as he pulled down two passes for touchdowns for the second consecutive week and earned John Mackey Tight End of the Week honors.

Bolser is a fifth year senior who hears the clock ticking quite loudly as each day of his final year of college football clicks away.

He’s a thoughtful guy who would like to play in the NFL, and I can’t imagine why that shouldn’t happen.  He’s got NFL size, good hands, nice speed for a guy his size, and he’s an excellent blocker.

Chris Hagan and I will talk to Bolser on Saturday morning on “Ahead of the Curve” (1070 the Fan – 9a-11a) prior to the Hoosiers game against Bowling Green.  Here’s a preview of that conversation.