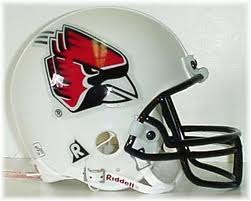 College football activity in the state was sparse at the FBS level yesterday. Indiana and Purdue were on bye weeks and Notre Dame was tucked away on the CBS Sports Network. But with RTV6 picking up the ESPN3 broadcast of Ball State at Akron, folks locally had a great opportunity to see the Cardinals earn another win to go 8-1 and remain the state’s best story in college football.

The 42-24 win at Akron won’t turn many heads. Frankly, Ball State (5-0 Mid-American Conference West division) is in the middle of a stretch of the schedule that won’t turn many heads. But what I’ve pointed out before and what many people still fail to embrace is that Ball State football is the best bang for the buck in the state right now, whether that’s actually paying to see the Cardinals play or taking three hours out of a perfect fall football afternoon to watch them on TV.

Quarterback Keith Wenning continued to show why he’s one of the best quarterbacks in the county, completing 25 of 35 passes for 240 yards and five touchdowns, the latter tying a school record. Wenning went into the game ranked second nationally in total passing yards. He’s already passed Nate Davis on the school’s all-time list and extended his record to 10,119 yards.

Wide receiver Willie Snead did what he’s done all year: rack up 100 yards receiving and make a highlight reel touchdown catch. The junior from Belle Glade, Fla. is quietly one of the most productive receivers in the country. Snead went into the game ranked third nationally in receiving yards and continues to garner the attention of those at the next level.

To call Snead productive is probably selling him short. He isn’t just a possession receiver who racks up stats. Snead makes stats by consistently getting open against multiple coverages and making grabs like he did yesterday – a one-handed catch in the back of the end zone that made me say to someone, “That’s Willie Snead, he makes one of those catches every game.”

Junior running back Jahwan Edwards had a very workman-like Jahwan Edwards type of day. He rushed for 120 yards and a touchdown. Edwards’ 37th career touchdown was a school record. He, too, is at the top of a list nationally, tied for first with 12 rushing touchdowns this season. He stepped up in a big way yesterday with fellow running back Horactio Banks missing the game to attend the funeral of slain high school teammate. All year, due to injuries and whatever else, stepping up when someone is down is what this team has done.

As for the defense, that will often be the question mark with this team. There are certainly some talented players on that side of the ball, no doubt. But too often it still looks like an average MAC defense. Whether there’s enough there to win a MAC title remains to be seen. There was enough on Saturday.

As I stated, this win won’t turn many heads. But Michigan escaped with a narrow win against Akron and No. 18 Northern Illinois only beat the Zips by seven. By comparison, Ball State took care of business in a convincing way. They did what they had to do – stay unbeaten in the MAC and remain on a collision course with undefeated NIU in a few weeks.