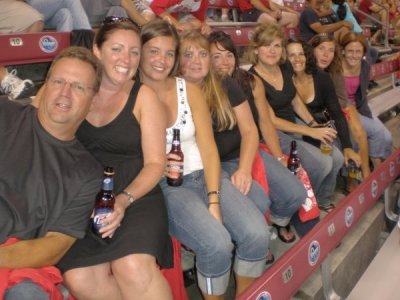 Kristi (4th from left) will be among her friends again in spirit for today’s Bengals vs. Colts game.

Shuckey (Kristi Rees) knew how to hold a grudge.  She hated that the Colts built a dome and then a stadium with a retractable roof, so she became a Cincinnati Bengals season ticket holder.

Football is meant to be played and watched in the elements, and anyone who didn’t agree was an idiot.  That’s what Shuckey believed, and as with everything she believed, she was not reluctant to share with bluntness and wit.

Some disagree politely.  They issue their opinion with caution and delicacy – packing a feather for the battle.  Converting with kindness through treading lightly was not Shuckey’s way.

Her arguments came without a cushion.

The first time I met her was at a bar where we met some mutual friends to watch the 2003 AFC Championship game between the Colts and Patriots.  Everyone in the bar was dressed in Colts blue, except Shuckey, who was thoroughly annoying as the only person not cheering for the Colts.

I liked her very much after getting to know her, but on that day, she was the most obnoxious person I had ever encountered.  She loudly challenged everyone with her anti-Colts rhetoric.  The Colts were 60 minutes from a trip to the Super Bowl, and this crazy woman sitting across from me was fervent in her support of Tom Brady and the Patriots.

For the last three minutes of the game – which was almost certainly a Patriots victory at that point – I stood between her eyes and the closest TV screen.  There was no way that I was going to sit idly by and allow the one anti-Colts person in the bar to enjoy the moment.

Shuckey died very suddenly a year-and-a-half ago today shortly after turning 40.  Many of her friends are in Cincinnati today for the Bengals vs. Colts game to celebrate her life.

There is no doubt she would have loved making the trek down I-74 to the game, not just to root for the Bengals, but to harangue the Colts and all who cheer for the team that deemed outdoor football a nuisance.

The weather sucks in Cincinnati – just as she would have preferred it – and she would have let all within a 40 row radius know about how the Colts are a bunch of wimps for keeping the snow, ice, and cold out.  Her voice was loud – really loud.

We can only guess whether Shuckey would have enjoyed a Colts loss or Bengals win more, but if she has anything to do with it from above, the Colts are going to lose big today, and their fans made miserable as they wonder why they sat in the cold for three hours to watch.

Shuckey is missed for her honestly, humor, and inner sweetness that she refused to show during our first meeting.