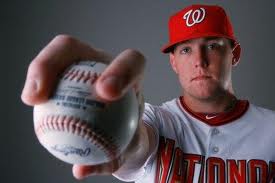 Drew Storen is a great role model for young kids who want to learn to pitch.

My son grew up playing basketball and baseball against Drew Storen, and it’s been fun to watch him become a very successful major league pitcher for the Washington Nationals.

There must have been something in the water in Brownburg as several guys in that age group have become outstanding professional players.  Lance Lynn is an all-star with the St. Louis Cardinals, and Gordon Heyward is putting together a breakout season for the Utah Jazz.

Storen joined “Ahead of the Curve” today to talk a little baseball with Fox 59’s Chris Hagan and me this morning, and he is exactly the same decent and erudite guy he was as young athlete a decade ago.

He’ll be back in town next weekend to take part in the Power Alley Baseball Academy’s Big League Holiday Pitching Camp with Lynn, B.J. Rosenberg, and Cory Wade.

Talking to people who went to Stanford as Storen did is always fun because they are smart and balanced.  Most have a sense of humor and enjoy the conversation.

There is a bit of a weird dynamic interviewing people on the radio because to do it well, you ask questions that well-mannered people would never ask in a private conversation.  Somehow, it’s appropriate while the answer will be broadcast on 50,000 watts.  I asked a personal question that I hoped would elicit the answer that Storen gave.

When he was young, Drew was a very emotional kid.  He demanded a lot from himself, and at the time I thought it was a shame because my belief has always been that youth sports is a diversion and win or lose, popsicles made everything okay.

Well, the kids I knew back in the day who took failure very personally almost all became very successful in sports, and I have changed my tune.  Instead of trying to counsel kids to relax and see the big picture, I’ve become a proponent of letting kids be who they are.  If they want to shut down after a loss, let ’em.  Of the kids who were wired tight, they all seem to be well adjusted adults, so who am I to question?

Drew answered the question like a champ and I’m certain gave comfort to parents listening who might be worried about their 10 year-old kids taking failure too personally.

If you have a kid who loves baseball, I can’t imagine two better kids to learn the game from that Drew and Lance.  Do your son a favor, and sign him up for the camp.