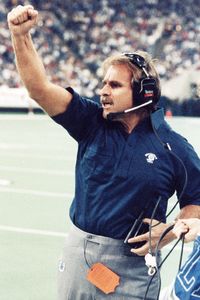 Any day is a good day to talk football to former NFL coach Rick Venturi on 1070 the Fan’s “Ahead of the Curve” with Chris Hagan and me, but today was a great day as he brings great first hand insight into Wade Phillips’ challenge as an interim coach, and knows Nick Saban and Marc Trestman well enough to offer a wonderfully singular perspective on the decisions they have made recently.

Nick Saban signed yet another extension at Alabama rather than seriously talk to Texas about accepting the rumored $10 million the Longhorns are reportedly ready to offer the right candidate – and that is a good description of Saban.  Venturi has been friends with Saban for 20 years, so what he said about Saban and his agent can be taken to the bank.

Quarterback controversies get coaches fired, and the Chicago Bears have a dandy.  Marc Trestman is committed to using Jay Cutler as his starter despite Cade McNown helping the Bears find a clear path to the posteseason.  Statistically, McNown has been superior in his five starts, and yet Cutler will start tomorrow at Cleveland.  Venturi has seen his share of QB debates, and knows Trestman.  He comes with a great response to a question with no easy answer.

Venturi has also spent the week looking at the Colts vs. Texans, and does a great job talking about the game tomorrow that will likely do nothing to help the AFC South champions improve their seeding in the upcoming playoffs.  That doesn’t make the game unimportant, but it will take some discipline for the Colts to play like they have skin in the game.

One team that will be watching with interest is the St. Louis Rams.  If the Texans win, the Rams will come closer to earning the #1 overall pick in the 2014 NFL Draft as a result of the 2012 trade that gave the Redskins the pick that sent Robert Griffin III to Washington DC.