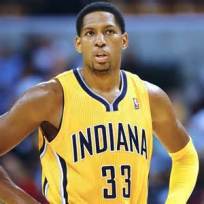 In the wake of a VERY disappointing loss to the Miami Heat Wednesday night – a game the Pacers gift-wrapped with poor execution down the stretch after leading by as many as 16 points in the second half – fans anxiously turn their attention to the return of Danny Granger tonight at Bankers Life Fieldhouse versus James Harding, Dwight Howard and the rest of the Houston Rockets

And the return of Granger is something to get excited about.

One thing the Pacers’ 16-1 start did was convince a lot of folks that the blue and gold were flawless. Who could blame them? Clearly, this is one of the best teams in the NBA – no argument here.

But to attain the ultimate goal of winning a championship, it’s going to take having the #1 seed, in my opinion. And to get the #1 seed, the Pacers still need some help off the bench and another scoring threat on the perimeter.

If healthy, Granger should be a nice compliment off the bench and help carry some of the scoring load. If he’s not, the front office will be better off knowing that now rather than later.

Wednesday’s game reminded me of last year – can’t hit enough perimeter shots and too many unnecessary, lazy turnovers. It was just one game, but it was a big one. There’s no shame in losing in Miami. But the way the Pacers lost the game was disappointing. And it left them only one game ahead of the Heat in the Eastern Conference standings, a fact not lost on me.

As good as this team is, the sights are aimed higher this season, as they should be. The Pacers are all-in. People want to talk championship but the Pacers can’t get the #1 seed throwing away games like Wednesday night. Can they win the East without the top seed? Sure, they can. But do you want to bet on that?

I may sound critical here, but it’s only because I know the Pacers are close to the ultimate prize. The Pacers have made it to the conference finals on seven occasions only to come up short of the Finals six times. Who isn’t ready for the next step?

Make no mistake; this Pacers team is right there. But the bar has been raised. This isn’t the 1995 Pacers or even 2012-13 Pacers. The goal is a #1 seed and championship. Ask anyone within the organization. I think analyzing this team with that goal in mind is what people have to do.

And for those who think the Pacers don’t need Granger? Well, not having Granger is probably the reason they didn’t beat the Heat last year. They just needed that additional weapon.

The bench is better (how could it not be – it was brutal last year), but the Pacers need a consistent perimeter scoring threat off the bench. If that’s Granger, great. If not, Larry Bird and Kevin Pritchard will work hard to figure it out. The sooner they find out, the better.