The latest injury to Paul George sealed the fate of 2014-2015 championship aspirations, even if many fans and media failed to grasp that the fate of championship hopes was sealed with the exit of Stephenson.

…for reasons I’m still trying to figure out.

Pacers fans were in a soften the blo 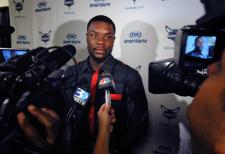 w justification mode when it was announce Lance Stephenson was moving on – phase I of dealing with a tough loss by failing to swallow the reality of it. As with many topics in sports, this whole Lance Stephenson free agency venture evolved to the point that somehow, all of the failures of everyone else on the Pacers last season have been forgotten and Lance Stephenson, the real problem, is gone. All is well. Right….

If you believed that, then you had entered phase II: dream mode.

I haven’t come full circle on this at all. Despite all of the different thoughts/opinions that were out there…the Pacers really didn’t want Stephenson, Stephenson wasn’t worth the money, Stephenson was the main reason the season went south;  the fact is the Pacers wanted him (for good reason) and why he’s not still in Indianapolis makes absolutely no sense to me. He must have been blown away by Michael Jordan’s courtship for some reason. That’s all I can think of.

I know this, the Pacers lost their second best player and have no way to replace his versatility. All of the role players in the world can’t replace Stephenson’s talent. And if this team has proven anything, it’s that it can’t just plug and play any role player into the system and have success.

I’m amazed at all the excuses Pacers fans made and how it felt most convenient to blame Stephenson for everything. Yet, all of the supposed leaders the Pacers have on the team didn’t play like leaders down the stretch. George Hill was unproductive too often. Paul George had too many games where wasn’t assertive enough and not very All-NBA-like. Hibbert was what he was – an absolute mess. And other players were grabbing off the court headlines for one reason or another.

You would think that a professional, effective team and coaching staff could overcome an issue with Stephenson if he was that big of a problem. Wasn’t he an integral part of the team when they were being talked about as the best team in the NBA the first half? It very well could be he changed after getting snubbed from the All-Star team, but I still don’t pin all the blame for the second half downfall on him. Heck, there were nights when he was the only player on the floor player with energy and passion. Yet, people will blame Stephenson for stealing rebounds from Hibbert instead of Hibbert not being aggressive enough and earning his $14 million. Stephenson led the team in rebounds, assists, FG% and only took 11 shots per game – hardly a chemistry train wreck, in my opinion. He shot 49% on a team that can’t shoot. Yeah, who needs him…

We’re all grasping at straws to try to identify what the problem was. I just think it was a myriad of things and it’s time for everyone else to prove their worth.

The problem is, the Pacers lost their second best player and a young one at that.

Now, one of the league’s best players, Paul George, is done for the year…

…more than a compound fracture, a compounding problem.  Enough said. There’s no grasping at straws here. This is unfortunate on so many levels – for George, the franchise and fans. If you still held onto the straw of hope that better chemistry would improve this team without Stephenson gone (though, weren’t we told by everyone many times that the chemistry in the locker room was the best they’ve been around?), you can just let it go; just let it go.  The season, by championship standards, is lost. Turn out the lights, the party’s over.

The two most talented players on the team (young ones at that) are currently gone – one not to return and the other staring at a LONG road to recovery. It’s time to reassess and remodel this team. Look, there are too many aging or incomplete pieces to this puzzle. And now they only have one young star to build around, and who knows what he will be like when he returns in a year.

During the free agency period and immediately after Stephenson signed with Charlotte, the theme was the team improved by subtraction. But reality slowly sunk in: Oh, yeah, Hibbert did have four scoreless playoff games and a slew of other duds. George Hill did only average half the assists Stephenson did. Who’s going to create now? The bench really wasn’t that good in 2013-2014, just better than the putrid 2012-2013 bench.

Now that George is out, it is clear that the hopes of the season are nothing more than hoping the Pacers can make the playoffs. With that in mind and assuming Paul George will return to form (not a guarantee), it’s time to re-mold this team for the post-injury Paul George era. With Stephenson gone, George is the only young building block left. Everything else is open for change. All of the Rodney Stuckeys, CJ Miles and Shawn Marions of the world aren’t going to replace George and Stephenson. And no one among the core rotation will be a spring chicken when George does return. All-in only gets you so far, not years.

With the injury to George, Derrick Rose returning to form for the Bulls and reports of Cleveland acquiring Kevin Love for the long term, the current window of opportunity just slammed shut. It’s time to open a new one.

One thought on “A Pacers Off-Season to Forget”