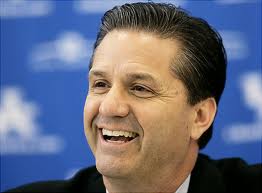 If John Calipari is worth $7.5M per year, shouldn’t his players get a small taste? The Big Five can now seriously ask – and answer – that question.

The fewer people at the conference table, the better the chances for a good strategy being enacted.  That’s a pretty good rule of business.  Yesterday, the NCAA voted to allow members of the Big Five conferences to sit at their own smaller table.

That move will allow members of the ACC, Big Ten, Big 12, Pac-12, and SEC to set their own rules in a number of areas – recruiting, access to agents, full cost-of-attendance compensation, staff sizes, mandatory hours limits, four year scholarships, and ability to control own image among them.

The economic chasm between the Big Five schools and the rest of the schools that currently comprise Division One is growing by the day, and there is nothing on the horizon that will cause that gap to shrink back to the point where they are able to compete on the same level.  In fact, it will geometrically explode over the next decade with ever increasing bonanzas from media deals.

Divisions exist in the NCAA for many good reasons – chief among them is the priority given to academics, and the differences in understanding what role athletics play at a college or university.  For many schools, athletics are a part of the overall education of those students talented enough to earn a spot on a roster.  For others, football and men’s basketball are about cash, while non-revenue sports continue to operate as part of the educational doctrine.

Continuing to govern athletic departments with so little in common by the same rules makes less and less sense, and finally yesterday came the acknowledgment that life would be better for all involved if the schools bathing in cash were allowed to determine their own course.

Like it or not, college football and men’s basketball are de facto minor leagues for the NFL and NBA.  Life would be simpler for everyone if those leagues would fund their own feeder system, but the inertia in favor of the current system is just too strong to overcome.  The NBDL is not a viable option for those college players seeking cash for their services.

Pretending that the supremely talented high school players who drive success in those two sports are attending college because they want to major in business, journalism, or East Asian studies might allow university presidents feel less slimy about exploiting the kids, but it doesn’t change the truth.

The truth is what the inventor of the modern NCAA called a neo-plantation mentality.  The talents of soon-to-be men are exploited to feather the nests of coaches and administrators.  The primary compensation is the mostly pass-through expense of an education.  For the vast majority, that’s a reasonable swap.  Spending four or five years in college without parents writing checks or taking out student loans hardly qualifies as doing hard time.

But the inequity for some is profound, and the ability of the Big Five to massage rules to acknowledge the need for a different experience for them should provide an evolution toward logic in the following ways:

As NCAA President Mark Emmert found out a couple of years ago, quick change is not welcomed by membership, and while autonomy for the Big Five will hasten the changes needed to answer the needs of athletes, it is not going to happen overnight.

Click here to finally deal with the dental problems you have been putting off. Today’s Dentistry will help you earn a smile you are proud of.

Bureaucrats enjoying largesse are smart enough to drag meaningful change through a labyrinthian system of hearings, so the lawsuits pending will continue to be necessary motivators toward change.  Otherwise, the talking would never end.