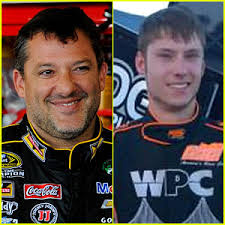 Race drivers are injured and occasionally die in racing.  That’s been true since the beginning, when the competitive spirit of men led them to value going faster than anyone else.

Sometimes the injuries and deaths are caused by bad luck, and in others it’s the untamed aggression that causes cars and by extension their drivers to assume precarious positions and pay an extreme price.

Last night, Kevin Ward, 20, died at the Canadaigua Motorsports Park dirt track as he walked from his car to the center of the track and was struck by NASCAR legend Tony Stewart’s car.  Ward left his car in what appeared to be anger after he spun and hit the fence after contact with Stewart’s car as they ran two wide coming out of a corner.

Anger is a dangerous indulgence, and those who allow it to inform their actions are occasionally assessed a tax.  Ward found that out last night in the worst possible way at a tragically young age.

The impulse to leave a race car and walk across the track to confront another driver denies the basic physical fact that cars being made of metal and weighing many times more than a human body makes them an impossible-to-beat quarry.

After watching the video many times, it seems Stewart did nothing wrong in the initial incident that sent Ward’s car spinning or when Ward was stuck as a virtual pedestrian in the middle of the track.  Ward’s erratic movements appeared difficult to predict as he moved toward Stewart’s car, and dirt tracks do not allow nimble responses from a driver.

Pedestrians in ordinary traffic are being struck regularly in downtown areas as those on foot have become more brazen in assuming the cars will respond as they wish.  Sadly, due to driver ineptitude, indifference, and distractions, cars don’t always respond in the anticipated way, and the result can be catastrophic.

Potential consequences determine actions – or should – and the consequence in an automobile vs. person battle is dire for people unprotected by a car – whether on a dirt track, asphalt oval, or downtown streets.

It is also irrefutable that those on foot should take nothing for granted on city streets or in parking lots as cars speed past despite laws enacted to supposedly protect them.

Real life has a way of imposing its own rules, and all race drivers today have a deeper understanding of why they should stay in the car rather than indulge the impulse to register discontent with an on track demonstration.

None of that is going to help Ward’s family move beyond their loss, nor Stewart forgive and forget his own role in the death of a compatriot.

The compulsion to loudly protest the violation of a basic standard of behavior is sometimes too strong to ignore, but the consequence needs for be gauged before that indulgence is granted.

Last night we learned again to allow anger to pass before acting as we saw the video of Ward trying to tell Stewart how he felt he was wronged, and what followed immediately thereafter.

Maybe this time the lesson will stick.

6 thoughts on “Dirt track driver Kevin Ward, hit and killed after angrily leaving car, teaches all a lesson in behavior”