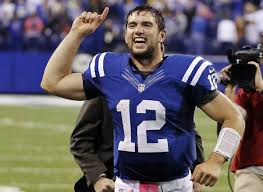 Andrew Luck is the one piece of the puzzle the Colts cannot afford to lose.

It was a miserable night of football for fans who continue to mistake preseason football for anything more than a scrimmage designed to help teams prepare for the regular season.

The intensity was low, and the errors were many in the 23-17 loss to the Saints.  That’s okay because this was a preseason game – a game that will never show up in the regular season standings.

The Colts appeared mostly disinterested or overmatched.  I will choose to see them as disinterested.  Coming off back-to-back 11-5 seasons, the Colts know who they are – a team quarterbacked by Andrew Luck, a third year leader with every tool needed to lead a team through a generation of winning.

And unlike the St. Louis Rams Sam Bradford who left Saturday’s game against the Cleveland Browns with a torn left ACL (again), Luck left the field healthy.  Fans hoping for more than that are wasting their energy, especially given the Colts historically poor play in the preseason.  In 2009, a season that ended with the Colts playing in the Super Bowl, the Colts lost Game Three of the preseason to the soon-to-be 2-14 Detroit Lions 18-17.  Didn’t matter then.  Doesn’t matter now.

That’s life in the preseason.  It’s football, and we like watching it because we like football, but believing your eyes causes unnecessary heart palpitations.  Sure, the Colts looked brutal, missing tackles, failing to contain Saints QBs, and being unable to convert a touchdown after earning a first and goal from inside the one with time running out in the first half.  An Ahmad Bradshaw run, followed by two errant Luck throws led to a disheartening three-points rather than seven.  Not good.  Not important.

None of that matters.  Failure in the preseason gives the Colts something to work on prior to the opener on September 7th, and nothing more.

The Colts will be just fine in the regular season because that is who they are.  Minus Luck, they aren’t terribly special.  But Luck may be special enough to get to the Super Bowl.

Keys for the Colts are health – Bradshaw is a key.  Greg Toler is another guy who managed to play very well Saturday, and he will be a key to the Colts ability to defend the pass.  The receiver corps is deep and talented, but injuries could leave them thin.  The positive is that in other spots, the Colts have worker bees who are nothing special and can be replaced quickly.  Take Joe Reitz – not a big drop off from either of the starting guards or tackles to Reitz.

If somehow, Luck is injured, fold up the tent.  He’s special, and losing someone special is going to hurt.

The opener is less than two weeks away, and at worst the Colts will be okay heading into it.  Okay is plenty good enough to win the AFC South, and make a run to the Super Bowl.  Relax.

2 thoughts on “Indianapolis Colts – Sure they sucked in Saturday’s loss to New Orleans, but it doesn’t matter – yet”