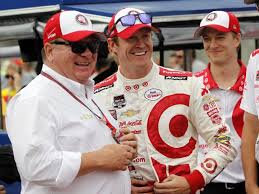 Scott Dixon of Target Chip Ganassi Racing won the pole yesterday for the Indy 500, but the event itself brings the magic to May in Indianapolis.

Hey, IndyCar had to do something!  Three cars in four days flipped over during practice, and a wonderful combination of luck and great engineering allowed all three drivers to walk away unscathed.  How long could that be expected to continue?

Somebody was going to get hurt or killed, and until somebody figures out why Chevys flip over when pointed in the wrong direction, the prudent move was to change the rules for qualifying.

That resulted in tedium for fans, frustration for race teams – especially those with Honda chassis that had yet to flip – and another black eye for a series that is having serious trouble drawing interest and eyeballs to races that feature some of the best racing in the world.

We could spend the rest of this space carping about a lack of testing for the new chassis that led to yesterday’s misery, or we can invest our time and effort getting excited for this Sunday’s race.  I would rather talk about the Indianapolis 500 – the start of which is the coolest moment in sports.

Sure, it’s true that nationally the Indianapolis 500 is completely irrelevant, except for hardcore nostalgia freaks, but that’s not the fault of the drivers and teams who keep it going through the sheer force of their love and will.

The beginning of the race is an incredible moment made possible through speed, talent, and trust as 11 rows of three cars hurtle into the first turn at 200+ miles per hour.

Speeds for yesterday’s Pole Day were expected to approach 235 miles per hour, and might have crept quite close to Arie Luyendyk’s lap record that has stood for nearly 20 years.  The speeds accomplished with the race setup mandated after Ed Carpenter’s wreck in yesterday’s practice were more than 10 mph under Luyendyk’s 236.986 four lap average.

With qualifying over, the business at hand is the world’s biggest single day sporting event.  Three-hundred thousand race fans will crowd into the grandstands and infield at the Indianapolis Motor Speedway for a race whose national luster is gone, but whose magic still remains to the bravery of its drivers, diligence of team members, sacrifice of those who came before, and devotion of hard core fans.

The Indianapolis Motor Speedway is hallowed ground, built by those who weren’t lucky enough to walk away when cars flipped.  Despite national sports pundits to whom I’ve spoken being unable to name a single driver who will run Sunday, the event is still a strange and magnificent way to usher in the summer.

Sure, many of the traditions are head scratchers.  A British fellow who is now the official historian of the Indianapolis Motor Speedway hosting a radio show where he is asked to recount the story of obscure driver Jigger Sirois, who never qualified for the Indy 500 virtually every time he hosts “The Talk of Gasoline Alley”

Jim Nabors has retired from the only employment he has enjoyed in a generation as the singer of “(Back Home Again in) Indiana”.  People over 50 remember Nabors from his signature character Gomer Pyle, but anyone younger wondered who the hell that nice old man was who sang before the race.  Ditto for Florence Henderson.  Ruth Buzzi’s annual appearance in the 500 Festival Parade is equally quirky but perfect.

I’ll be at the Indy 500 as always this Sunday.  As a transplanted Hoosier, the Indy 500 was a tough quarry at first, but with each year the things that seemingly make so little sense, start to feel like home.  On paper, it’s crazy.  In person, it’s perfect.

Next year will bring the 100th running of this slice of Americana, and I wouldn’t miss it regardless of Pole Day weirdness or Carb Day debauchery.